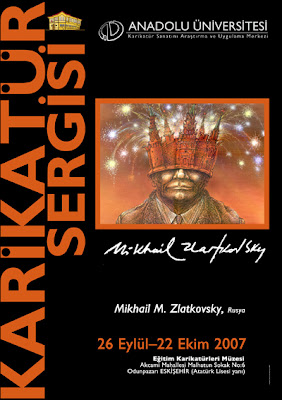 Zlatkovsky exhibition in Turkey
Anadolu University Museum of Cartoon Art is displaying Mihail M. Zlatkovsky's works in Turkey. There are 60 cartoons in the exhibition about problems in human life by the world-famous Russian artist. They will be on exhibition between Sep 26 - Oct 22, 2007 at: Anadolu Üniversitesi Eğitim Karikatürleri Müzesi, Akcami Mh. Malhatun Sk. No: 6 Odunpazarı ESKİŞEHİR / TURKEY.
The opening ceremony is at 17.30 on Wednesday, Sep 26, 2007.
MIKHAIL M. ZLATKOVSKY
Was born in August, 21, 1944 at village of St.Christopher, Tambov region in a family of The Red Army officers. The family legend says that Russian branch of Zlatkovskies is from a Polish nobility traced back to the end of XII century. After suppression of Kostyushko' rebellion, (end of XVIII century), the great-great-grandfather of the artist was banished to Russia. All men in the family were a sort of priests: before 1831 - Catholics, after - orthodox priests in the Oryol province, European part of Russia.
The grandfather, Kozma Mikolajevitch, did not accept "Sergijanski's heresy" and served secretly as a priest of Russian Cave Church for fourteen years. He was executed on November 26, 1937. The father, Michael Kuzmitch, a colonel, a professor, and a doctor of the military sciences. Being 7 years old, he has officially refused from his father, then from his son at his 72.
Mikhail Zlatkovsky was graduated from Moscow Engineering-Physical Institute (Nuclear Physics Dept.) in 1967 with major in Accelerators of Elementary Particles and worked as the physicist-researcher for 5 years.
In 1971 throw out physics and became a free-lance artist.

Worked as the Chief-Art-Designer in several leading newspapers and magazines. In 1993-98 used to live in the USA, where was Chief-art director of newspapers.
Now the Editorial Cartoonist of the daily all-state newspaper "New Messages ".
Primary activity: political cartoons and caricature, books and magazines illustration, posters.
The basic direction in creativity: "sense art, "problems graphics".
Art-research scientist of the State Institute of Art, where has prepared the thesis for a doctor's degree "The History of the Russian Cartoon", and

wrote text books "The Theory and Practice of Images Creation".
During 1999-2001 term took the professor position at The Moscow State University, department of the art journalism.
Secretary of the Russian Journalists Union
During 18 years (till 2001) his collection of the art awards was the biggest all over the world – 211 prizes of the international and national competitions of cartoons, animations, posters, designs, illustrations, among its there are about 50 Grand prizes - "Gold Esope " of Gabrovo, Bulgaria, Grand prix of Montreal, Canada, "the Gold Hat " of Knokke-Hiest, Belgium, (twice), the First prize in Istanbul, Turkey, Grand prix in South Korea, "Gold Date" of Bordighery, Italy, "the Gold Egg" of Kroushoutem, Belgium, "the Gold Pencil "of "Satyricon", Poland, and others.
The most important art achievements are:
In 1992, was awarded as "The Best Artist in a Cartooning" after international Peers interrogation,
“Gold pen”- the highest Russian professional artist award. 2003,
“The Best artist of the world”,- Grand prix of the XVI Amadora International cartoons festival, Portugal, 2005.
Personal exhibitions in Belgium, Germany, France, Italy (twice), in Malta, Poland (twice), Russia, Switzerland, USA.
Founder and the President of the Russian Union of Cartoonists.
President of The Russian division of FECO
WEB: http://www.krk.anadolu.edu.tr/karw/muze/sergiler_exhibitions.htm
Zlatkovsky's personal website: http://www.zlatkovsky.ru/movie.lhtm