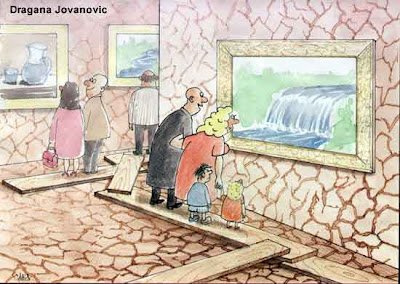 THE PARTICIPATION CONDITIONS FOR INTERNATIONAL CARTOON CONTEST NATURE & MAN
SUBJECT : Nature and Man
The subject of the year 2007 : Global Climate Change and Our World.
The Association of Cartoonists, TEMA Foundation and Cartoon Publishing organize this contest aiming to direct people for focusing more on this matter by describing through cartoons that mankind will sooner or later face these dangers and by focusing on their probable results and also aiming to create an attitude and behavioral change in the society in order to slow down this process.
The contest is open for all the amateur and professional cartoonists.
The cartoons may be published or awarded. 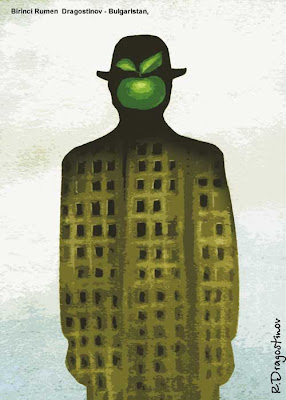 Technique is free. Can be color or black and white.
The size is A4 (21 x 29.7 cm).
Contestant cartoons can be sent only through internet.
Awards: By the end of each month, the best 3 cartoons of that month will be selected and 20 saplings will be planted in Tekirdag Memorial forest on their behalf. An introductory sign will be erected on the plantation region.
The works that are sent to the contest will be exhibited through internet.
By the end of the year, the awarded works and works determined by the selection committee will be collected in a CD and will be sent to the authors of the works as free of charge.
The cartoons of the contest, whether awarded or not, may be exhibited in the introductory announcements of the contest and they can be published in books, magazines, posters, postcards.
Copyrights will not be paid to the authors of the works for these publications. In case they are used for other purposes or by third parties, then permission will be obtained from the author of the work.
Those who send their works to the contest, will also indicate whether they can be used or not, on t-shirts to be produced by TEMA Foundation's Economic Management in order to obtain revenue.
The utilization rights of the works are for Turkey.
The artists participating in the contest will be deemed to accept all the participation conditions.
This contest is organized by the Association of Cartoonists, TEMA Foundation and Cartoon Publishing. Since environmental disasters are continuous, our contest will also continue without interruption.
Top above: August 2007 Prizewinner: Dragana Jovanovic (Serbia)
Right above: July 2007 First Prize: Rumen Dragostinov (Bulgaria)
Right below: August 2007 Prizewinner: Seyran Caferli (Azerbaijan) 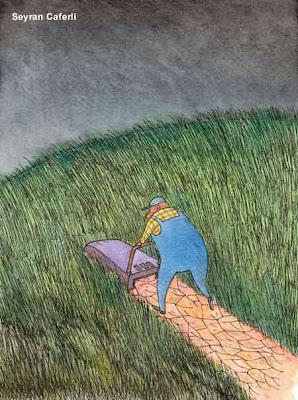