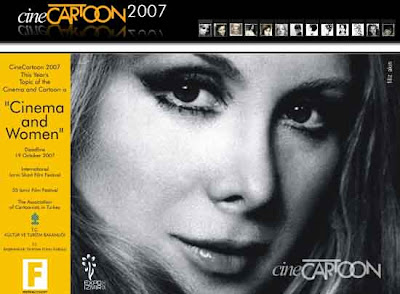 CineCartoon International Cartoon Competition is organised in Turkey by International Izmir Short Film Festival and 35 Izmir Film Festival. It is planned to keep this competition annually as a tradition within the festival. Competition is open to all professional and amateur cartoon artists from all countries. The exhibit to be held this year has a theme on "cinema and woman".
General Info
1.Original works should be sent to the competition. If the cartoons are sent as a computer output, it should have original signature (wet signature) on it. Photographs, photocopies, etc. won't be accepted.
2.The size of the cartoons to be sent can not exceed A3 paper (29,7 x 42 cm).
3.CinCartoon organisation is not responsible of any damages or losses during transport or on mail.
4.Exhibition is open to professional and amateur artists.
5.To apply, the online entry form should be filled in. A short biography and a photograph of the artist should be sent along with the original work. Otherwise the application won't be accepted.
6.Cartoons should be sent to the festival as scanned at least 300 dpi, jpg format. The maximum file size is 10MB. The address to be sent is info@cinecartoon.net.
7.Selection Jury; Cem Koç (The Association of Cartoonists, Izmir Correspondant), Kayhan Kirmizigul (IISFF President), Mehmet Aslan, Murteza Albayrak, Eray Özbek.
Selection Jury will gather in November 2007.
8.The works accepted to the exhibition won't be sent back.
9. The applicant accepts that he gives the permission to use his works for news and promotion purposes by filling in the online application form.
10.The works that are not accepted for the exhibit can be sent back by the written demand of the artist.
11.All cartoons used for the exhibit will be gathered in an album. This album will be sent to all artist whose works are used.
12.Exhibition will go on during the festival. The three works selected by the festival & exhibiton viewers will be awarded. Also they will be rewarded by sponsor companies.
13.CineCartoon International Cartoon Exhibition Award Ceremony will be held in Izmir in November 2007.
14.Deadline for entries is 20 October 2007.
WEB: http://www.cinecartoon.net/en/

This contest is dead advance it born!