IX INTERNATIONAL CARICATURE CONTEST - MAGAZINE “NOSOROG” (“RHINOCERVS”)
The organizer of IX International caricature contest is the International magazine for satire, humor and cartoons “Nosorog”. The contest is opened for professional or amateur cartoonists, from any country, any nationality, age, sex, or profession.
THEME: The World's best Painters!
Subtopics, subtheme: The most famous paintings!
Prizes:
First Prize: 300 euros + Diploma
Second Prize: Diploma
Third Prize: Diploma
(First, Second and Third Prize will be from category THEME !)
Five + Five ( 5 + 5 ) Special Diplomas ( for Theme and Sub-Theme )
Conditions of entry:
1. Technique: Any technique will be accepted
2. IMPORTANT: Please, write for each caricature which painter you present! Also, if you present famous paintings, please, write which one is presented.
3. Entries: maximum 7 entries will be submitted, in Theme, and 7 entries in Sub-Theme ( 7 + 7 )
4. Size of entries: A4, A3 format
5. Send your name, surname, address, country and the e-mail.
6. You may send by post or by E-mail
7. E-mail for sending art-work: nosorog.magazine@gmail.com
8. Note: 300 dpi resolution; JPG, JPEG format
9. If you send by post, address is:
MAGAZINE “NOSOROG”
CARA DUSANA 4
78000 BANJA LUKA
REPUBLIKA SRPSKA
Bosnia and Herzegovina
10. Note: Please, do not send originals, because we will not send you back!
11. DEADLINE
Entry deadline is the December 25th 2016.
(Please write on envelope: PRINTED MATTER - NO VALUE !)
12. EXHIBITION: The exhibition will take place in the gallery of the National Library of Republika Srpska, city Banja Luka
13 - IMPORTANT NOTE - 1: In the event that the State, from which the awarded artist is, under international sanctions, the organizer is not liable if it cannot deliver the prize!
14 – IMPORTANT NOTE – 2: The Organizer of this Cartoon Competition has permanent troubles to deliver diploma or money-prize, if winner is from Iran! The Organizer is not responsible for that.
15. Note: Sender must be author of caricatures!
16. Jury members:
Mrs. Irina Iosip, visual artist, painter, cartoonist and Editor of "Salt and Pepper" magazine - Romania
Mrs. Leila Alaiy, professor of art, Tabriz Cartoon – Iran
Congratulations!
Mrs. Svetlana Ceca Krstich (Krstic), painter - Serbia
Mr. Aleksandar Blatnik, painter, cartoonist - Serbia
Mr. Milenko Kosanovich (Kosanovic), cartoonist - Serbia
Mr. Milenko Mihajlovich (Mihajlovic), painter, cartoonist – Serbia
Mr. Branislav Boskovich (Boskovic), painter - Serbia
Mr. Miladin Berich (Beric), Editor in “Nosorog” Magazine - Serbs Republic /BA
Mr. Goran Kljajich, Editor in “Nosorog” Magazine ("Rhinoceros") - Republika Srpska.
We wish a good art-work and successful participation to everyone.
International magazine for satire, cartoon and caricature “Nosorog” (“Rhinocervs”)
City Banja Luka
Republika Srpska
Balkan, Europe
www.nosorog.rs.sr
http://www.nosorog.rs.sr/diff/diff2.html
http://nosorog-rhinocervs.weebly.com/
Source: http://nosorog-rhinocervs.weebly.com/ .
No comments: 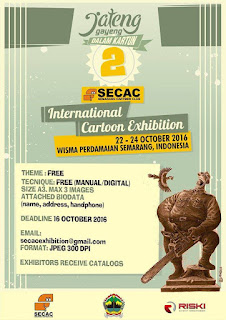 SECAC (Semarang Cartoon Club) is a cartoonist community in Semarang, Indonesia. Our members hundreds of people. Our activity follows the cartoon exhibitions and competitions. This time we will hold an international cartoon exhibition. Your participation is highly appreciated all. Thanks.
Source: facebook.
No comments: 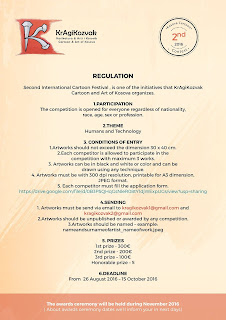 KrAgiKozvak - Cartoon and Art of Kosova Association announces cartoon contest of Second International Cartoon Festival with theme "Humans and Technology". Cartoon contest starts from 26 August 2016 - 15 October 2016 (EXTENDED:) 30 OCTOBER 2016. You can find application form in https://drive.google.com/file/d/0B3PSQHqGsNleR08tY1djWExpUGs/view and other details about KrAgiKozvak in https://kragikozvak.blogspot.com .
No comments: 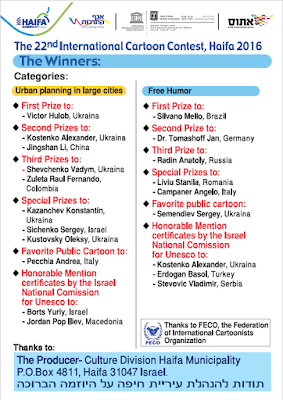 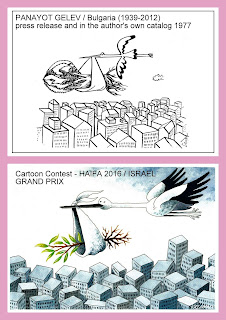 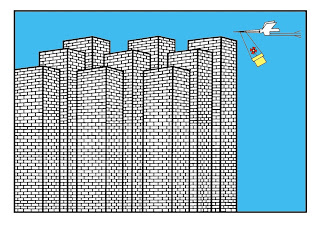 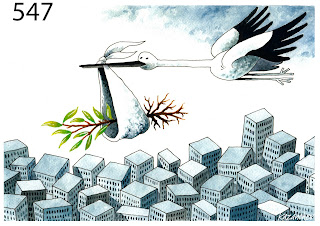 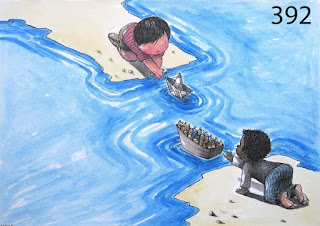 REGULATIONS FOR THE JABOATÃO DOS GUARARAPES
INTERNATIONAL GRAPHIC HUMOUR SALON
​The works will be exhibited from 25th July to 21th August at 24:00, 2016.
ABOUT THE THEME
The Jaboatão dos Guararapes - Pernambuco International Graphic Humour Salon (SIHG-PE) has the OLIMPIC SPIRITS AND ATHLETES as theme. The idea is to put at the centre of discussion issues related with the Olympic spirit, sports practice, health, well-being, healthy body and mind. Homage is paid to worldwide known athletes who have contributed to sports in all its categories.
2) ABOUT THE JABOATÃO DOS GUARARAPES INTERNATIONAL GRAPHIC HUMOUR SALON
The idea is to promote, through the cartoons and caricature contest, the reflection about Human Rights and about personalities who contributed with their ideas and thoughts to humanity.
3) ABOUT THE CONTESTANTS
a) Both, Brazilian or foreigners, amateur or professional, graphic artists in general may participate.
b) Each contestant can send up to 2(two) pieces of work for each category: cartoon or caricature, as long as they have not been awarded the price by the time they do so.
c) The candidate to enrol on this contest acknowledges being solely responsible for the veracity of the data and authorship of the work presented, being held liable on a civil and criminal basis, during or after the contest, if proven guilty.
d) Anyone working directly with the organisation, awarding committee and production of SIHG-PE is not allowed to participate, including and up to their second degree relatives.
4) ABOUT ENTRY
a) Registration forms will be provided on the website www.sihgpe.com
b) The registration must be done exclusively via website.
c) The contestant must fill in a form for each category, attaching the corresponding pieces of work.
d) The pieces of work must be sent in A3 format (297 mm x 420 mm), horizontally or vertically, in JPEG, with resolution of 300 DPI.
e) The organising committee takes no responsibility for entries or work not received due to technical problems with computers, network congestion, communication failure, or any other factor that prevents the successful electronic entry.
f) The homologation of the entries will be published through the confirmation email.
g) The entry will imply accepting this rules and regulations in all its terms, including the deference of the final result of the contest and the items related to the destination and use of the drawings.
5) ABOUT THE FINAL DESTINATION AND USE OF THE WORKS OF ART
a) The pieces of work will go through a pre-selection process and the chosen ones will be shown at the SIHG-PE exhibition. The full list of selected works will also be published on the site www.sihgpe.com
b) The authors of the selected works will assign the copyright to SIHG to their use at the salon during the event and advertisement of the next ones. The prizewinner pieces may be permanently used for advertisement purpose of the current and future editions of the SIHG. In either case, it is not possible to charge for the use of the works, considering the selection and awarding criterion described in this rules and regulations.
6 - DEADLINES
a) The works will be exhibited from 25th July to 21th August at 24:00, 2016.
b) The selection of works will be on 27th August 2016.
c) The judgement of the selected works will occur on 10th September 2016.
d) The exhibition will take place from 11th September to 11th October 2016.
7) ABOUT THE JUDJEMENT, SELECTION AND PRIZE
a) For the selection and prize awarding, the obeyed criteria will be: creativity, originality and pertinence to the proposed theme. The selection will be made by a judging commission whose decision must be accepted by the participants, with no possibility of being challenged.
b) The works sent to SIHG will go through two juries: a selection and an awarding one. The first one, formed by qualified professionals from the graphic humour field will select around 80 (eighty) works which will compose the exhibition and catalogue. Among these, the awarded works will be selected by the awarding commission.
c) From the selected works, 3 (three) will be awarded: one Grand Prix among all the works selected and a 1st place in each category.
d) The jury may choose up to two works from each category to be awarded an Honourable mention, which does not include a monetary prize.
e) Possible omissions will be remedied in due time by the jury.
8) ABOUT THE PRIZE AWARDING
a) The selected will be awarded the following prizes per category:
GRAND PRIX
R$ 4.000,00 and trophy.
CARTUM
R$ 2.000,00 and trophy;
Honourable mention ................. Certificate.
CARICATURE
R$ 2.000,00 and trophy;
Honourable mention ................. Certificate.
b) A total of R$8.000,00 (eight thousand reais) will be awarded in prizes.
c) All selected works for the exhibition will have their works published in the SIHG catalogue.
d)The winners will be announced on 11th September, 2016, upon the exhibition opening at 15pm and through the site of the event. The winners will be informed via telegram, phone call and/or email about their awards.
e) The winners will receive the amount of their prize within 40 days from the disclosure via bank account deposit.
f) The amount will be subject to the tax in force at the moment of accreditation.
g) In order to receive the amount of the prize it is compulsory to be a bank account holder in their country.
Samuca Andrade
Organiser
Clériston Andrade
Coordinator
Bruno Alves
Coordinator.
Source: sihgpe.
No comments: