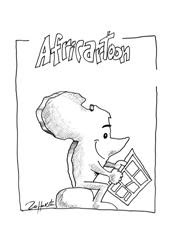 The aim of the competition is to tell through comics and cartoons stories of immigration, denied rights and integration in pluralistic societies, to denounce the deep malaise of the third millennium and open squarci of hope through the design revealing the difficult survival not only in the territories of origin but also in port. All this in the context of the celebration of 60 years by the UN Charter on Human Rights, when 60 years later we still millions of people forced to roam the world in search of their human rights.
The works best help to achieve an exhibition on immigration and human rights "Travel without borders" that will be exposed to "Lucca Comics and Games" (100,000 visitors, the most important manifestation of this sector in Italy) from October 18 to November 2, 2008, and then in Rome in the context of the celebrations of the 60th anniversary of the UN Charter on Human Rights in December 2008.
In 2009 the exhibition will become itinerant and touch all Italian regions.
In addition, the best work will receive a cash prize for the value of 500 euros.
The CIR (Italian Council for Refugees) and AFRICARTOON COMPETITION are organizing the press and drawing comics: TRAVEL WITHOUT BORDERS.
For all designers in the world, refugees and immigrants in Europe (each designer has to send his resume and its coordinated).
DRAWINGS: drawings should illustrate the topic of the contest.
DELIVERY: drawings must arrive on September 30, 2008 by e-mail at the following addresses: ginobrs@libero.it and marisapaolucci@tin.it
OR original drawings to:
Marisa Paolucci, Via Rastrelli 167, 00128 Roma, Italy.
The drawings should arrive in September 30.
ABOUT THE COMPETITION: The new explorers of the third millennium go anywhere in search of new dreams and new perspectives on life. Telling with the drawing (without words) histories of immigration and integration, disappointment and hope, life difficult in its own country and in the new country. The drawings will be on display to remind everyone the celebration of the 60th card of the UN on human rights, especially the difficult situation that many human beings must endure.
1. Regard without borders: women and homes without invisible Civil and Political Rights. The choice of who decides to leave or stay.
2. Chemin invisible: the leak and the courage to seek a new life.
3. Clandestine and asylum: the difficult path to show to be in danger.
4. Foreign destiny for the difficult construction of a multicultural society.
PRIZES: For the best design there will be a prize of 500 euros.
All the best designs chosen will be exhibited in the exhibition Journey Without Borders "Lucca Comics and Games" (100,000 visitors, the most important event of comic books in Italy, October 18 - November 2, 2008), since in Rome during the celebration the 60th anniversary of the UN Charter on Human Rights in December 2008, during the 2009 exhibition will be presented in all Italian cities.