12th Hungarian Cartoon Festival: European Year of Intercultural dialogue
INVITATION TO TENDER
The Ministry of Foreign Affairs for the Republic of Hungary and the Hungarian Culture Foundation organise the 12th Hungarian Cartoon Festival between 3-30 November, 2008 in the building of the Hungarian Culture Foundation, at Budapest.
The title of the Festival is “Intercultural dialogue”.
We invite Hungarian and foreign tenders in the following topics:
I. Defined theme:
“European Year of Intercultural Dialogue”
II. Optional theme:
Valid only with the defined theme.
Prizes:
The first prize of the defined theme is 200.000,- HUF*
The prize of the Secretariat of International Affairs of the Ministry of Education and Culture within the theme “about/for youth” is 100.000,- HUF*
Other prizes are draws.
The maximum size of the cartoon is A/3.
Deadline: 22 October, 2008.
Address: Magyar Kultúra Alapítvány "Intercultural Dialogue - Cartoon Festival", 1014 Budapest, Szentháromság tér 6, HUNGARY
The jury consists of Hungarian and foreign artist and professionals.
You can apply for the Cartoon Festival if you filled, signed and send the attached application form ( Click here ) as well.
The organizers publish the catalogue of the Festival.
After the exhibition of Budapest we represent the best cartoons in different Hungarian and European cities.
Rules and applicatian form in Hungarian: http://www.mka.hu/karikatura2008.pdf
More information: Hungarian Culture Foundation: Szilvia Bába, Marica Gödöllöi
Telephone: (+36-) 224-8122; (+36-1) 224-8113 E-mail: bsz@mka.hu; gm@mka.hu
*The prizes are taxable incomes. 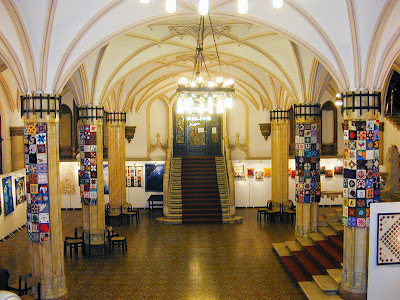 “European Year of Intercultural Dialogue 2008”
Europe is becoming more culturally diverse. The enlargement of the European Union, deregulation of employment laws and globalisation have increased the multicultural character of many countries, adding to the number of languages, religions, ethnic and cultural backgrounds found on the continent. As a result, intercultural dialogue has an increasingly important role to play in fostering European identity and citizenship.
The European Year of Intercultural Dialogue (EYID) 2008 recognises that Europe’s great cultural diversity represents a unique advantage. It will encourage all those living in Europe to explore the benefits of our rich cultural heritage and opportunities to learn from different cultural traditions.
The Year will feature a small number of flagship projects on a European level, as well as EU support for a national project in each Member State, and a Partner programme aimed at mobilising civil society. The active involvement of civil society will be essential in highlighting good practices and identifying needs in intercultural dialogue. Well-known ambassadors have also been appointed to raise awareness of the importance and benefits of intercultural dialogue.
The European Year of Intercultural Dialogue (2008) was established by Decision N° 1983/2006/EC of the European Parliament and of the Council. (18 December 2006).
Topics:
Intercultural dialogue is a wide-ranging transversal priority of the European Union.
To illustrate more concretely what it may cover in the context of the EIYD 2008, eight major topics have been selected:
* Culture and the media
* Education / Science
* Migration
* Minorities
* Multilingualism
* Religion
* The workplace
* Youth
More information:
http://www.interculturaldialogue2008.eu/
http://www.interculturaldialogue2008.eu/411.0.html?&L=&redirect_url=my-startpage-eyid.html