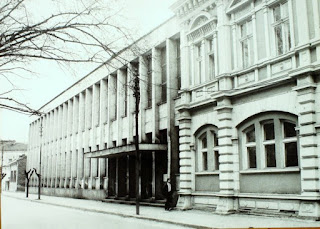 The "Lyuben Karavelov" Regional library – Ruse, is one of the largest public libraries in Bulgaria, which this year celebrates its 128th anniversary.
Among the most significant events in its rich cultural calendar is the annual International Competition for Ex Libris, an initiative launched in 2005. The competition has an established international reputation; it involved over 600 artists from over 50 countries worldwide. All received bookplates can be seen on the library website: http://www.libruse.bg/image/tid/22
In 2015 for the second time the library organizes an international competition for comic and blitzanimation, titled SPACE AND CHAOS.
The aim of organizers is through the media of comics as a link between literature, fine art, animation, cinema and caricature to unify and stimulate various art communities in the field of comics and visual arts.
The regulation and application form you can see on the library website:
http://libruse.bg/konkursi-proekti/vhod-exlibris
http://libruse.bg/konkursi-proekti/vhod-comics

*
REGIONAL LIBRARY LYUBEN KARAVELOV – RUSE ORGANIZES
COMICS AND BLITZANIMATION INTERNATIONAL COMPETITION RUSE 2016
REGULATIONS FOR PARTICIPATION
SPACE AND CHAOS
The aim of organizers is through the media of comics as a link between literature, fine art, animation, cinema and caricature to unify and stimulate various art communities in the field of comics and visual arts.
REQUIREMENTS AND RULES
The contest is carried out in two categories: traditional comics and blitzanimation.
Anyone aged 18 + of any nationality of any profession may participate.
1/ Traditional comics category:
Number of artworks participating: Authors are allowed to send up to 3 graphic works, four copies each.
Pages: Maximum 6 pages. The number of each page must be put at the back of it.
Format: Format of artwork must be А3 or А4.
Technique: Any
Plot: Artwork plot must be complete within the number of pages sent.
2/ Blitzanimation category:
Minimum film duration: 30 seconds
Maximum film duration: 60 seconds
Technique: free: puppet, classical, 3D animation
Format: HD
Synopsys of film up to 500 symbols; three digital advertisement film photo shoots.
NECESSARY DOCUMENTS FOR PARTICIPATION
A filled in and signed Application form accessible at: www.libruse.bg. Incomplete and incorrectly filled in application forms shall not be regarded. In case of change of data, authors must undertake to inform the Library.
ADDRESS AND DEADLINE FOR SUBMISSION
Artwork is to be sent via post mail (date on stamp holds valid), deadline is 30.04. 2016
Artwork must be received at the following address:
7000 Ruse, Bulgaria
1st, Dondukov-Korsakov Str.
Regional Library Lyuben Karavelov
COMICS AND BLITZANIMATION INTERNATIONAL COMPETITION
Films must be sent online in HD Format using dox.bg or other at the e-mail address: service@libruse.bg, libruse@libruse.bg
RIGHT OF OWNERSHIP, RIGHTS FOR USE AND PUBLICATION OF ARTWORKS PARTICIPATING IN THE COMPETITION
Regional Library "Lyuben Karavelov" - Ruse acquires the right to use the sent for the contest works for exhibitions, publications and advertising, without the need of explicit consent of the authors and without payment. Participation in the competition is equal to the acception of this Regulation by each author, which is certified with the signature on the application form. The received works will not be returned to their authors. They become a part of the permanent exhibition "Museum of Comics."
AWARDS
Grand Prix - 300 EURO
Results will be announced in June 2016. Every applicant who meets the requirements above will receive a certificate and an e-catalogue via email given in the Application form. After a pre-selection authors shall be presented in the e-catalogue by only one artwork. All artworks received will be published in the Regional Library “Lyuben Karavelov” - Ruse website: www.libruse.bg.
Selection and awards are determined by a specially selected for this purpose professional jury.
An exhibition/presentation of artworks admitted to the Competition will be performed to Ruse’s public and media.
Contact and further info at:
E-mail: service@libruse.bg, libruse@libruse.bg
Теl: + 359 82 820 126; Fax: +359 82 820134; Mob. tel: +359 878 574916.