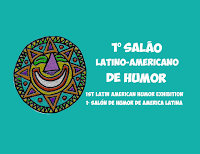 RULES OF COMPETITION - 1º LATIN-AMERICAN HUMOR SALON
The Latin-American humor salon was created with the intention to divulge Culture, Tourism, Arts and the conspicuous importance of Latin American on the world context, through the graphic humor.
The organization counts with the support of “Memorial da América Latina”, Brazil’s Cartoonist Association and Brazil’s Graphical Arts Memorial Institute
This competition has the Curatorship of the cartoonist JAL (José Alberto Lovetro) and Gualberto Costa, as the Art Director.
COMPETITION THEME:
The theme this year will be: LATIN AMERICAN SONGS – Tango, Rumba, Samba, Bolero or Bossa Nova, among others stiles, and the greatest musicians, composers and singers could be portrayed in cartoons, caricatures by the participants designers.
PARTICIPATION:
All Graphic Humor Designers (cartoons and caricatures), professional or not can participate sending till 3 (three) works about the proposed theme in this year. The works doesn’t be necessarily unpublished but anyway, it cannot be awarded with prizes in any anterior event.
INSCRIPTIONS DATES:
Inscriptions: From January 10th 2016 till March 15th 2016
Works selections (about 150) that will participate of the exposition this year and the ward award will occurs between March 15th and March 22th, 2016
Final vote for the selected participants will be between March 24th and April 10th 2016.
The exposition starts on the Gabriel Garcia Marques Space, located in Memorial da América Latina.
Date: April 18th till May 20th /2016
Inscriptions Details:
The Inscriptions will be realized through fulfilling the inscription form inside the following site:
www.salaolatinoamericanodehumor.com
(On this site can be read the competition regulation, also.)
Only will be accepted works sent by this email below:
subscription@salaolatinoamericanodehumor.com
DIMENSIONS
Each design, must have the dimensions established as: 30 centimeters x 40 centimeters (horizontal or vertical) with resolution of 300 DPI, and will be accepted archives in JPEG, RGB, in medium quality definition.
THE AWARD
The prize will be R$ 12.000,00, (twelve thousands Reais) and it will be converted in other currency in case of the winner be a foreign person, considering so, the date of the amount dispatch. The organizing commission will contact immediately after April 18th 2016, to pay such integral values already proposed, with paid taxes, but nevertheless with the delivery shipping costs for another countries, discounted according the laws established.
We will have a selection jury with high skilled people chosen by the event organization and a final jury composed by themselves participants, selected for the exposition, voting personally, each one by e-mail. Each voter cannot vote in himself or in herself, but in another selected work. This final votes will have date for begins and for finishes and will have a winner, independent of any of selected, get to vote or not, in such deadline date. The voting will be open for all voters have knowledge of each one of them ballots.
IMPORTANT:
Realizing the inscription for this competition, the participant agree with all items of this regulation, as soon as his/her solicitation be accepted, and will be responsible for his/her work as original and as his/her own creation. The award result can be contested till one week after the exposition opening, in case of a person can prove any irregularity that could be committed without the committee`s organization cognizance and as well its jurors.
The participant still agree in automatically to cede the copy rights of his/her work(s) of his/her work(s) registered in this competition, for reproductions and publications and on the great media support, in unrestricted manner, concerning the objective of the event divulgation. Inclusive for a possible preparing of a works catalogs with the selected works.
Any other pending problem not mentioned hereby, must be resolved by the event organizers.