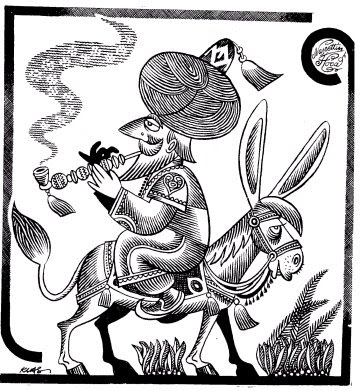 FIRST INTERNATIONAL "ALEKSANDAR KLAS" CARTOON CONTEST
The oldest Serbian illustrated review "Ilustrovana politika" is organizing the first international cartoon contest honoring its own the most famous cartoonist Aleksandar Klas (1928-2002). Since 1950 over 30 000 his cartoons were published in national and international newspapers and magazines, and he had over 60 individual exhibitions. He got more than 130 prizes, so he entered in “Guinness’s book of records” as the most rewarded cartoonist in the world.
Besides cartoon his occupation is painting, as well as illustration of books.
Participation rules:
1. Competition is open to professional and amateur cartoonists from all over the world.
2. The theme of the cartoons is free.
3. Participants take part in the competition with original cartoons. Cartoons must be signed by the cartoonist in case that they are submitted as digital prints. Photographs, photocopies, etc., will not be accepted.
4. Size of cartoons should not exceed 30 x 40 cm.
5. Name, surname, address, phone number, e-mail, country of origin of the participant should be written on the back of his/her piece of work.
6. Works must reach the organizer not later than November 1, 2009, packed in protective cover to:
"Ilustrovana politika" Za konkurs karikatura "Aleksandar Klas" Cetinjska 1, 11000 Belgrade SERBIA
7. Result will be announced on second half of November 2009.
8. Participating cartoons will be kept at the virtual Cartoon Museum, to be established by the review "Ilustrovana politika".
9. First International "Aleksandar Klas" Cartoon Contest will be celebrated with an award ceremony and exhibition of selected cartoons in November 2009 in Belgrade.
10. Jury will award the following prizes:
- Grand Prix A. Klas: 1000 euros and diploma
- 5 diplomas
11. Participating cartoons will be put into catalogue. The cartoons for the catalogue and exhibition will be selected by a jury. A catalogue will be sent to the cartoonists whose piece of work are exhibited and published in the catalogue.
12. Organizer reserve the right to use the sent cartoons for ILUSTROVANA POLITIKA advertising purposes without any special fees paid to the authors: to be exhibited and reproduced in a variety of advertising materials, as well as printed in catalogue and review.
13. Participants are considered to have accepted all the conditions.
14. Participants are kindly asked not to post the works via electronic means as these will not be accepted for the competition.
Best Regards,
Spiro Radulovic,
President of the Jury.
Source: CNC