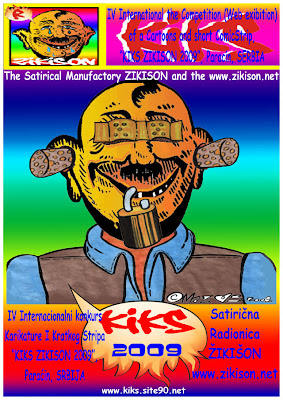 IV The Competition of a Caricature and a Short Comic Strip, KIKS Zikison 2009
http://www.zikison.net/
http://www.kiks.site90.net/, kiks.blogalerie.com
http://www.comics-stripovi-exyu.blogspot.com/
and The Satirical Manufactory "Zikison" are announcing in the categories, the themes:
1. PORTRAIT cartoon "ZIKISON", WITHOUT WORDS. How to see the cartoonist ZIKISON and his age, technology-free, for all three categories of works to send the full?
2. Caricature WITHOUT WORDS - FREE, free technique.
3. SHORT ALTERNATIVNA STRIP, WITHOUT WORDS - FREE, free technique.
The competition will be opened and free for all of the professionals and amateurs, for affirmed and unknown authors from 7 to 77 years of age, for all people on this planet but in the case if someone appears from other planet then we will become the first interplanetar competition.
AWARDS: First prize in all three categories, the presentation of the special page http://www.zikison.net/Weekly electronic journal zikison and http://www.kiks.site90.net/ kiks (Caricature and Short Comic Cartoon). All authors whose works jury will be selected in your gallery Zikison.net and KIKS.net. All authors whose works selected for the jury will get ŽIKIŠON Charter or Diploma.
Works can be sent by E-mail zikison@zikison.net & zikison.mazos@gmail.com & kiks.zikison@yahoo.com with author’s short biography and photography. All of received works will not be returned to the senders. The organization of this project keeps the right for using and publishing of received works for the organization’s needs. Deadline: No deadline (Permanent Exhibition)
The competition is open Non-Stop! (Results: December 2009 / January 2010)
ZIKISON (1885. - 1950.) Was a Satirist, a caricaturist, an editor, a publisher, and a printer. Between two wars in Serbia he was an actuator, a Co – Author editor of many of newspaper for humor and satire. He has been suffering and imprisoned by Communist Regime in 1949. Soon after that torture and seizing his property, he was died in 1950.