The 35th annual meeting of the Association of Cartoonists in Turkey is held in Istanbul on Saturday, 29 November 2008. According to the regulation, the new yearly executive committee members are elected and once again Metin Peker and his list swept the board having no rivals and receiving little criticism.
122 members attended the annual meeting and the new executive committee members received the following votes: Metin Peker 118, İbrahim Tapa 111, Aziz Yavuzdoğan 111, Kadir Doğruer 110, Kayıhan Fırat 107.
In 2009 the Association is to celebrate the 40th anniversary of its foundation. And in 2010 Istanbul is to be one of the European Capital of Cultures, along with Essen (Germany) and Peç (Hungary). It seems there is a lot to do for the new team and that won't be easy. 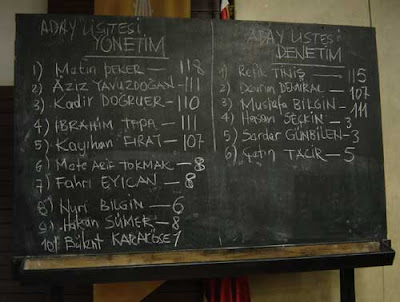 Shots from the annual meeting and dinner