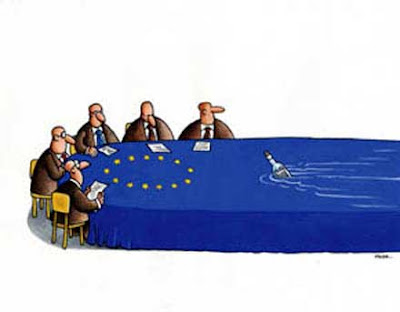 Cartoonist from Turkey wins the European Cartoon Contest 2008, Portugal
Musa Gumus, from Turkey, won the First Prize of the European Cartoon Contest 2008, with a work called EU (European Union) (See above). The second prize of this initiative of the Portuguese Printing Press Museum has been given to Alessandro Gatto, from Italy and the Third Prize was to Heino Partanen, from Finland.
The UN High Representative for the Alliance of Civilizations Jorge Sampaio, the Minister of the Presidency Pedro Silva Pereira, the Secretary of State of the Council of Ministers Jorge Lacão and the High Commissioner for Immigration and Intercultural Dialogue Rosário Farmhouse, appreciated the awarded works in the lobby of the Teatro Camões, on the evening of December 18, shortly before the official closing of the European Year of Intercultural Dialogue."
The works were selected by an international jury presided by George Wolinski, and had the following members: the president of FECO, Marlene Pohle; Helena Gelpi, a representative of the High Commission for Immigration and Intercultural Dialogue; Xaquin Marin, director of the Museum of Humor of Fene (Spain ), Ronaldo, well-known Brazilian cartoonist and Luis Humberto Marcos, director of the Museum.
The high quality of works led the jury to give 8 Honourable Mentions to the artists from four countries: Luc Vernimmen - Belgium (1), David Vela - Spain (1), Ahmet Aykanat, Oguz Gurel, Musa Gumus - Turkey (3) and Mihai Ignat, Cristian Topan, Pavel Constantin - Romania (3). Special attention also needs the seven finalists cartoons, including one of the Portuguese painter and journalist Agostinho Santos.
This international competition began in 2007 with the theme "Inequality, Discrimination and Prejudice” and fits in the line of work this museum has developed within the framework of promoting the humour drawing, which the clearest expression is the PortoCartoon - World Festival.
In 2007, the book edited by the museum on the first edition of this European Cartoon Contest won the prize for best information of the European Year of Equal Opportunities for All, given by the European Union.