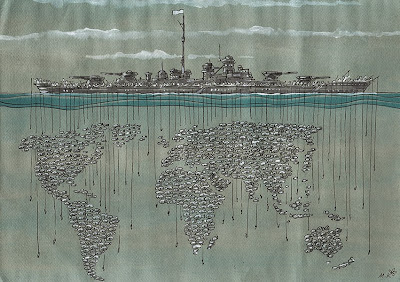 Results of the international jury on the 46th WORLD GALLERY OF CARTOONS Skopje 2015, Rep. Macedonia
Dear friends cartoonists,
In the jubilee year when OSTEN celebrates 70 years since its establishment (1 January 1945) in the 46th edition of its WORLD GALLERY OF CARTOONS Skopje 2015, we appear again before the world public to convey the messages from the cartoonists coming from all over the world. Consistent with our commitment to promoting art on paper, again this year one of the basic criteria to participate in the World Gallery of Cartoons was to apply with original, hand-drawn cartoons, satirical drawings, and comics. We are pleased that cartoonists from all over the world welcome this commitment of ours and recognize our endeavors to encourage genuine artistic values in the creation of cartoons. That is, after all, also confirmed by the traditionally great number of participants in our event: this year 206 cartoonists with 680 original works from 50 countries all over the world have applied!
The figures speak for themselves in context of the interest shown to participate in the competition; on the other hand, the issue of the quality of the works sent was entrusted to real professionals in the field of cartoons: the first selection was made by prominent cartoonists from Bulgaria, Alla and Chavdar Georgievi, while members of the international jury deciding on the prizes consisted of: Bernd Pohlenz (Germany), Murat Erdoğan (Turkey), Stane Jagodič (Slovenia), Midhad Ajanović Ajan (Sweden), and Mice Jankulovski (Macedonia).
Their shared assessment is that this year’s edition of World Gallery of Cartoons received cartoons, satirical drawings, and comics of exceptional quality, both with regard to the very idea and conveying the message, and to the artistic expression… which, by the way, made their work even more difficult. Still they agree on this results:
FIRST AWARD FOR CARTOON - Mehmet KAHRAMAN, Turkey (Top)
FIRST AWARD FOR COMIC/STRIP - Pavel CONSTANTIN, Romania
FIRST AWARD FOR SATIRICAL DRAWING - Mikhail ZLATKOVSKY, Russia
SPECIAL AWARDS
Agim KRASNIQI - KrAgi, Kosovo
Aleksandar BLATNIK, Serbia
Angelo CAMPANER, Italy
Blaze DOKULESKI, Macedonia
Halit KURTULMUS AYTOSLU, Turkey
Louis POL, Australia
Raul Fernando ZULETA, Colombia
Mirko MOLNAR, Serbia
Ross THOMSON, UK
Valeriu KURTU, Germany
AWARD CICO (for Macedonian Cartoonist) - Darko MARKOVIC.
You can see the Awarded Cartoonists here.
CONGRATULATIONS to the winners, and many thanks to all participants of the 46th WORLD GALLERY OF CARTOONS Skopje 2015!
As Murat Erdogan (the jury member and author of the foreword in the catalog) said: All cartoonists who sent their works to the 46th World Gallery of Cartoons Skopje 2015 contributed to the philosophy of life which challenge the problems of the world and encourage peace, freedom and smile over the world, and they will leave their marks to the history of cartoons.
On the behalf of the OSTEN team, I'm sending you best regards and… see you next year!
Kornelija Koneska, CEO
P.S. Follow the updates of the opening of the exhibition of cartoons and the official announcement of the awards in OSTEN Gallery tomorrow, on 28th May 2015 at 20:20 h. on the World Gallery of Cartoons FB fun page... 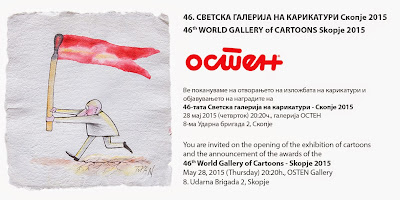