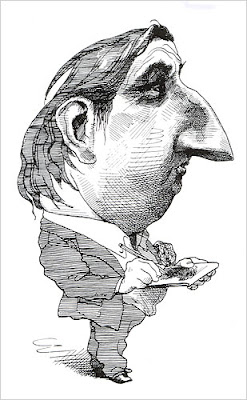 World-famous caricaturist David Levine dies at the age of 83 on Tuesday at New York Presbyterian Hospital in Manhattan of prostate cancer and complications from other ailments. He was diagnosed with the eye disease macular degeneration in 2006.
Levine's drawings of politicians, literary people and historical figures typically had large heads and exaggerated features. Especially his political portraits showed the mind of an artist worriedly concerned about the world in which he lived: Among his most famous images is that of President Lyndon B. Johnson pulling up his shirt to reveal that his gallbladder operation scar was shaped like the map of Vietnam.
Levine's work appeared in The New York Review of Books, Esquire, The New York Times, The Washington Post, Rolling Stone, Sports Illustrated, Time and The New Yorker, among other publications.
Levine also did watercolor paintings, many depicting New York scenes.
(Summarised from: wikipedia; nytimes; bostonglobe).