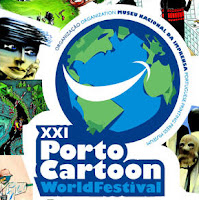 General Rules and Regulations
1 MAIN THEME: LANGUAGES AND THE WORLD
The United Nations (UN) declared 2019 as “the year of indigenous languages” (in the last few years, many languages have disappeared).
PortoCartoon wants the world’s humor to be wider.
“Languages and the World” is therefore a theme for multiple reflections: which world and which languages? What worlds do we speak about and which languages? What languages do we connect to? What are their supremacy between them? Who dominates who by the language? The language as an instrument of subjugation? Does language give power?
There are multiple meanings. Meetings / Disagreements.
Humor leads the way.
2 SPECIAL AWARDS FOR CARICATURE
Following to the line started in 2013, with the introduction of the Caricature Special Award on PortoCartoon, we have chosen for 2019 Fernão de Magalhães and Bob Dylan.
FERNÃO DE MAGALHÃES (c. 1480-1521)
An important figure of the history of the discoveries, Fernão de Magalhães (aka Ferdinand Magellan) made in 1519 the first voyage of circum-navigation. He connected the world people thought was fragmented, linear and not round. He was the author of the first globalization
The 500 years of this odyssey that begun in Sevilla (Spain), are celebrated in different parts of the World, from 2019 to 2022.
This Portuguese, from the north of Portugal, made the voyage to the service of the Spanish king Carlos V.
The ‘Magalhães Route’ links many cities and towns.
The humor of caricature can reinforce this dimension of the world unity, at this time of dangerous threats.
BOB DYLAN (1941 - )
Winner of the Literature Nobel Prize for in 2016, Bob Dylan became the first musician to win such an award. The award astonished the world, but the Swedish Academy’s reason was clear: Dylan created “new ways of poetic expression within the framework of the American music tradition.”
Dylan is a permanent re-inventor of the word-music connection. He has reinvented himself for more than 56 years, passing on to the music the rhymes of his “pictorial way of thinking”.
With iconic songs for different generations, Dylan avoided the spotlight of being awarded with the Nobel Prize.
In the lyrics of many songs, there is not only poetry, but humor as well.
3 Cartoonists can submit works for the MAIN THEME and for the FREE CATEGORY, as in the previous editions.
4 Artists who don’t wish to compete can send us their works EXTRA--COMPETITION, informing of their decision.
5.1. Cartoons must be original. We accept any kind of graphical techniques, including digital artwork sent by e-mail, as long as the drawings are SIGNED BY THE AUTHOR, are identified as PRINT NUMBER ONE and as an original for this contest.
5.2. Can also be presented sculptures pieces of humour, in any kind of material.
6 The artworks cannot exceed the following measurements:
- IN PAPER, 42 x 30 cm (DIN A3);
- SCULPTURE PIECES, 42 x 30 x 30 cm
7 Cartoons should be sent with the author’s Resumé, in Portuguese or English, (publications, exhibitions, prizes…) and must be identified on the reverse with the following information:
- Author’s name and address;
- Year, title and theme section.
8 Entries should arrive at the PORTUGUESE PRINTING PRESS MUSEUM until January 31st 2019 (EXTENDED:) 11 FEBRUARY 2019, along with the filled Entry Form.
9 The works should be sent to:
PortoCartoon-World Festival, The Portuguese Printing Press Museum,
Estrada Nacional 108, nº 206
4300-316 PORTO, Portugal.
Or to the e-mail address:
portocartoon@museudaimprensa.pt
10 The participation in PortoCartoon automatically implies that the author waives copyrights of his works in any kind of platform, concerning the production and diffusion of the festival.
11 The AWARDS, including a TROPHY and a DIPLOMA, will be the following:
Grand Prize PORTOCARTOON 4000 Euro (half in money and half in Port wine), travel and stay costs for the Awards Ceremony in Portugal
2nd Prize PORTOCARTOON 1250 Euro (half in money and half in Port wine), travel and stay costs for the Awards Ceremony in Portugal
3rd Prize PORTOCARTOON 750 Euro (half in money and half in Port wine), travel and stay costs for the Awards Ceremony in Portugal
Special Award for CARICATURE 1st Prize 500 Euro (half in money and half in Port wine)
Special Award for CARICATURE 2nd Prize 200 Euro (half in money and half in Port wine)
Special Award for CARICATURE 3rd Prize 100 Euro (half in money and half in Port wine)
Honorable Mentions 50 Euro.
12 The organization does not ensure to send prizes on bottles of wine.
13 The Jury will have an odd number of members and its decisions will be final and cannot be subject to any type of appeal or complaint.
14 The awarded works will become property of the PORTUGUESE PRINTING PRESS MUSEUM and will take part of the INTERNACIONAL CARTOON GALLERY. The others will be returned to the artists, if formally requested with the entry form, after the exhibitions (during PortoCartoon and others in different cities and countries).
15 In case of using non-awarded works in other cases except PortoCartoon exhibitions or its promotion, copyright payment will be made to the artists.
16 All the artists whose works are selected for the exhibition will receive a DIGITAL CATALOGUE, that will be sent by e-mail to download. If the artist wants to receive a printed catalogue, he should request it and support the shipment costs.
17 The winning artists will receive the prizes in june 2 17 019, in a public ceremony.
Organisation: PORTUGUESE PRINTING PRESS MUSEUM
Address PortoCartoon, Estrada Nacional 108, nº 206, 4300-316 Porto - Portugal
E-mail: portocartoon@museudaimprensa.pt
Entry Form (PDF) on source.