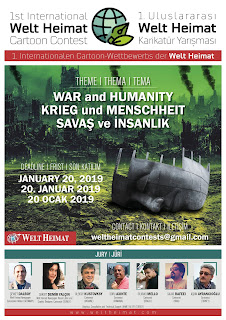 1st Welt Heimat International Cartoon Contest Specification
Subject of the Competition: War and Humanity
Purpose of the Competition:
The Welt Heimat Newspaper published monthly in German and Turkish in the German state Baden-Württemberg, approves of organizing a cartoon contest in its 4th year. This international competition is about cruelty of war, destruction, demolition of human soul, despair against refuge and war and dangerous developments in weapon technology. The aim here is to issue a call to cartoonists living all over the world to be sensible to humanity in the frame of humor.
Terms of Participation
1- The competition is organized internationally and is open to all amateur or professional cartoonists.
2- The subject of the competition is "War and Humanity". Under this title, topics such as war, massacres, armaments, genocides, refugees, children in war, migrations, crimes against humanity, which have affected the whole world and humanity for centuries, can be handled.
3- As the competition is organized on an international scale, it is necessary to prepare the works without writing.
4- Technical use is free in the works to be sent to the competition. The size of the artwork should be at least A-4 (29.7 cm x 21 cm), A-3 (29.7 cm x 42 cm), 300 dpi, and JPG format.
5- The works to be sent to the competition may have been published before but they should not have been awarded in any competition. The award will be canceled if the award-winning works are documented to have been awarded in another competition. Objections against similar and stolen works will be taken into consideration.
6- It is possible to participate in the competition with maximum 5 works. Participants will not be awarded more than one award.
7- Works for participation in the contest will be sent to e-mail: weltheimatcontests@gmail.com . The participant should add a photograph and a resume to the mail along with the cartoon.
8- The deadline for entry to the competition is January 20, 2019. Works submitted after this date will not be evaluated.
9- The Welt Heimat newspaper will also have the right to use the cartoons sent to the competition in various media and publications, newspaper and internet sites. Participants will acknowledge that they accept the conditions of the competition by sending works to the contest, and will not seek any future compensation in the event that the works they submit are used in the places specified in this specification.
10- Members of the jury, members of the organizing committee and their first-degree relatives cannot participate in the competition.
11- Cartoons found appropriate by the jury will be exhibited at various events in different countries such as Germany and Turkey.
12- Selection committee of the competition:
Şevket Dalboy - Welt Heimat Newspaper Concession holder / Germany
Saadet Demir Yalçın – Welt Heimat Newspaper Visual Editor and Graphic Designer, Cartoonist / Turkey
Oleksiy Kustovsky – Cartoonist / Ukraine
Axinte Doru - Cartoonist / Romania
Silvano Mello - Cartoonist / Brazil
Sajad Rafeei - Cartoonist / Iran
Aşkın Ayrancıoğlu - Cartoonist / Turkey.
Graphics, consultation and technical support: Ahmet Altay / Turkey
13- The results of the competition will be forwarded to award winning artists and press organs.
14- Awards of the Competition:
1st Award: 500 Euro
2nd Award: 300 Euro
3rd Award: 150 Euro
5 Honorable Mentions (awards given by various organizations).
15- All participants will be sent a certificate of participation. First e-album of the competition will be published.
Source: Saadet Demir Yalçın.

Being a strong theme very much relevant to the present scenario of the world we live, the incentive prize do not justify to attract more participants in this project.

It's not easy to be a cartoonist these days. The prizes one can get in various competitions may make a difference in the life of many talented professionals. So, don't agree with Legden Bhutia's opinion. The more prizes the contests have the possibility to offer, the better...