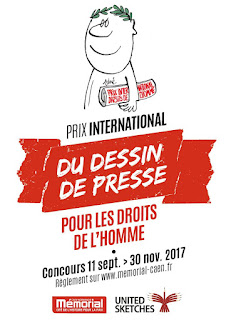 Prix Mémorial, The International Cartoon Awards for Human Rights
“United Sketches”, the International Association for Freedom of expression and Cartoonists in exile,
Kianoush Ramezani, its founder president & “The Caen Memorial museum”
are organizing the “Prix Mémorial”, The International Cartoon Awards for Human Rights.
Cartoonists from all over the world are invited to send their applications from 11 September 2017 to 30 November 2017
The theme is: “Defending human rights”.
Applicants should send maximum 2 cartoons [in high quality] together with their short biography and photo portrait via email.
The only address to send your applications is prixmemorial@unitedsketches.org
Awards:
Mémorial de Caen award: 3000€
Siné award: 1000€ [in the memory of Siné, the great French cartoonist and founder of Siné Mensuel magazine]
People‘s choice award: 1000€
Young citizen award: 1000€ [an special award by United Sketches].
Award winners will be officially announced at the Speeches for the Defence competition which will take place from Friday 26 January to Sunday 28 January 2018.
The selected nominees will see their cartoon published on the Internet and the social media in January 2018.
Link to the regulations on source.