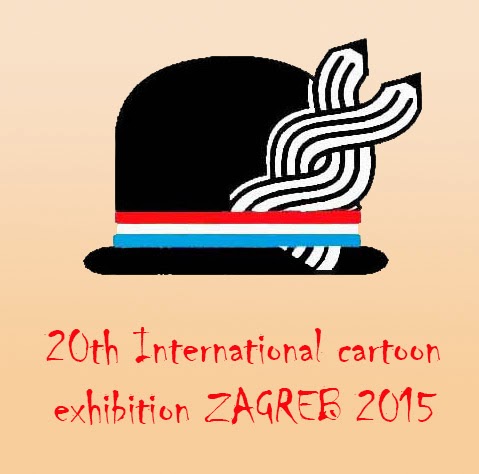 20. INTERNATIONAL CARTOON EXHIBITION ZAGREB 2015
A. PARTICIPATION
The organizer of the 20th International cartoon exhibition ZAGREB 2015 is the Croatian Cartoonist Association.
The festival is opened for everyone regardless of nationality, age, sex, or profession.
B. THEME PAINTING ( FROM CAVES TO COMPUTERS )
C. ENTRIES
Conditions of entry:
1. Original works and digital artworks will be accepted. Digital artwork is to be numbered in pencil on the front and pencil signed. Copies cannot be admitted.
2. Entries can be either black and white or coloured.
3. There should be the name, the surname and the adress on the reverse side of cartoons.
4. The cartoons must not have been previously awarded on festivals.
5. Maximum 3 entries will be submitted.
6. Size of entries is A4 or A3 format.
D. DEADLINE
Entry deadline is the 16th of April 2015.
E. ADDRESS
CROATIAN CARTOONIST ASSOCIATION
(HRVATSKO DRUŠTVO KARIKATURISTA)
SAVSKA CESTA 100
10000 ZAGREB, CROATIA
F. PRIZES AND AWARDS
First Prize 1.000 EUR
Second Prize 500 EUR
Third Prize 300 EUR
Five Special mentions
G. EXHIBITION
The exhibition will take place in Gallery Klovićevi dvori in Zagreb on the 2th of June 2015.
H. OTHER CONDITIONS
Authors of works that qualify to the exhibition are given a presentation copy of the exhibition cataloque.
Only on explicit request will remaining (original) works be returned to the owners in the end of the exhibition cycle (in the second half of the year 2016).
The organizer reserves the right to reproduce the works sent to the festival, Zagreb 2015, as the advertising material without being obliged to pay a fee to an author whose work may be used.
The prize-winning works become property of the organizer.
Entry Form here .
WEB: http://www.hdk.hr/ .