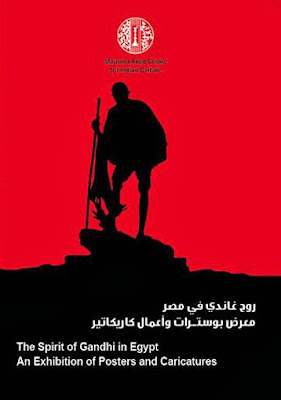 Inauguration of an Exhibition "Spirit of Gandhi in Egypt" at the Maulana Azad Centre for Indian Culture
To mark the birthday of Mahatma Gandhi on 2 October, which was announced as the International Day of Non-violence by the UN General Assembly in 2007, the Maulana Azad Centre for Indian Culture (MACIC) will organize an exhibition entitled "Spirit of Gandhi in Egypt." The exhibition will contain prize winning entries for the poster competition which was conducted by the Indian Embassy in 2012 under the title "Did you sense the Spirit of Gandhi in Tahrir?" as well as caricatures on Mahatma Gandhi by prominent artists of the Egyptian Caricature Society. Ambassador Suri will talk about the relevance of Gandhi’s philosophy and ideas in today’s world.
The exhibition of posters consists of a symbolic number of colourful designs from India, Egypt and other African countries received by the Embassy for the poster design contest which was launched on 2nd of October, 2012. The contest was open for youth from Egypt, India and other African countries. The jury, which included Head of Fine Arts Sector Dr. Salah El Meleigy, artist Mohamed Ablah and Director of a leading design firm 'the Ideaworks', Mr. Sudhir Horo, received 84 entries for the adult section and 37 entries for the children’s section. About 20 of these posters will be exhibited. The Egyptian winner, Amr Shalaan, who visited the National Institute of Design in India as part of his prize, will give a short presentation on his experiences.
The exhibition will also see a selection of caricatures on Mahatma Gandhi, including various facets of his life, by prominent artists of the Egyptian Caricature Society. The Caricature Society is actively collaborating with the Embassy in creating a collection of portraits of prominent Indian personalities, including politicians, filmstars, and other leading figures.
The Exhibition will be inaugurated by the Ambassador Mr. Navdeep Suri, at 6:00pm on 2 October at the Maulana Azad Centre for Indian Culture (MACIC), 23, Talaat Harb, Downtown Cairo. The exhibition will remain open till the 10th of October, except for Fridays and Saturdays.
WEB: www.indembcairo.com.
(Also on facebook.)