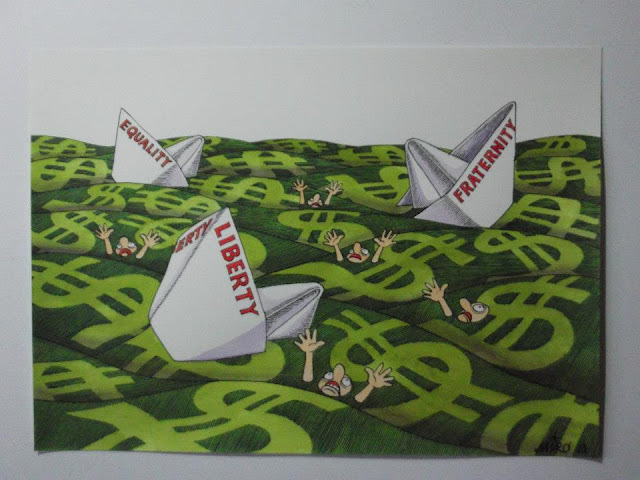 Miro Stefanovic, from Serbia, was the winner of Grand Prize of the 15th PortoCartoon-World Festival, organized by the Portuguese Printing Press Museum, under the theme "Liberty, Equality and Fraternity". The winning work is entitled "Shipwreck" (See top).
The second prize – “Atrapados” (Trapped) was awarded to Boligan, an artist from Cuba living in México, and the third – Libertea” - to Wilem Rasing, from Holland.
The quality of the works, led the international jury to award 8 Honourable Mentions to artists from different countries, such as: Belgium (two), England, Israel, Poland, Romania (two) and Ukraine:
Lucv Descheemaeker - Belgium, "Dilemma"
Luc Vernimmen - Belgium, untitled
Mahmoudi Houmayoun, England, "Liberty"
Alex Bartfeld - Israel, "Libre"
Pawel Stanczyk - Poland, "Liberty Equality Fraternity"
Julian Pena-pai, Romania, "Opening Ceremony"
Mihai Ignat, Romania, untitled
Vladimir Kazanevsky, Ucrania, untitled.
This year's edition included two special awards in tribute to the filmmaker Manoel de Oliveira (which this year will be 105 years old) and to the Nobel Prize José Saramago. The winners were respectively Mauricio Parra, from Colombia, and Ivan Prado, an author born in Peru and living in Germany.
In appreciation were 1700 works from more than 500 artists coming from all continents. Iran is the country with more participation: 121 works from 41 cartoonists, followed by Romania, Serbia, Turkey, Portugal and Belgium.
The international jury of 15th PortoCartoon was chaired by by Peter Nieuwendijk, President-General of Feco (Netherlands) and integrated Xaquin Marín, founder of the Museum of Humor Fene (Spain), Francisco Laranjo, director of the Faculty of Fine Arts of University of Porto and Luis Humberto Marcos, director of PortoCartoon and the Portuguese Printing Press Museum.
Winning cartoons on source: cartoonvirtualmuseum.org.