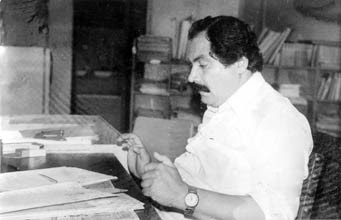 INTERNATIONAL “NACI TALAT” PORTRAIT CARTOON EXHIBITION (CYPRUS)
THEME: “Naci Talat Portrait Cartoons...”
NACI TALAT BIOGRAPHY:
He was born on March 10, 1945 in Buyukkonuk Village in Magusa. After completing his primary and secondary education in Nicosia, in 1962 he went to University of Ankara Law School. He married Vesile Usar in 1969 and had a daughter and a son. He then graduated from Law School in 1971. He was fluent in English and Greek and while he was a student, he took part in various positions in student organizations. He was the first president of the Cypriot Turkish National Student Federation.
When he was elected as a deputy of the Congress in June 1976, he took a break from his job as a lawyer which he started in 1972. He was a representative of Cumhuriyetci Turk Partisi in the Founding Assembly of KTFD (Turkish Federative State of Cyprus) in 1975 and (Northern Cyprus Parlementer Assembly) in 1983. Without any breaks, he was re-elected as a deputy after the June 1981 and June 1985 elections. After the May 1990 election, even though he was elected as a deputy, he boycotted the anti-democratic practices and did not join the Congress.
Between 1972 and 1991, Naci Talat was the Secretary General of Cumhuriyetci Turk Partisi, and he dedicated his life for the peace and democracy struggle of the Cypriot Turkish Community.
This legendary leader, who was one of the most important politicians that guided Cypriot Turkish political life, said his goodbyes to the struggle and the people who loved him, on June 26, 1991 in London.
Even though years have passed since he passed away, Naci Talat's thoughts, voice, and image still continue to affect tens of thousands of people.
DEADLINE: 15 October 2010
TECHNICAL INFO:
A4 Size… Max. 100-300dpi... Max. one entry…
Black & white or colored, any style, any technique will be accepted…
Name, address, tel, e-mail…
All cartoonists can participate in festival through your own E-mail by submitting your cartoon to: yeniakrep@kibris.net
The cartoons will be displayed at or may be used for promotional purposes: cards, posters, catalogs, newspapers, magazine and books etc. Participants are considered to have accepted all the conditions and are aware that their submissions may be reprinted and used without future monetary compensation.
PRIZES:
First Prize (Plaquet) To a person
Second Prize (Plaquet) Two persons
Third Prize (Plaquet) Three persons.
EXHIBITION:
October 2010 Naci Talat Foundation (Nicosia - Cyprus)
ORGANIZATORS:
TURKISH CYPRIOT CARTOONISTS’ ASSOCIATION (FECO-CYPRUS)
NACI TALAT FOUNDATION
Naci Talat photos, please visit the following web page: http://www.nacitalat.com/ 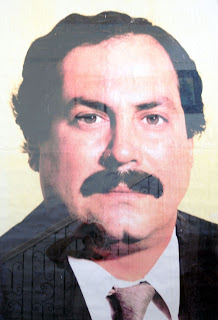