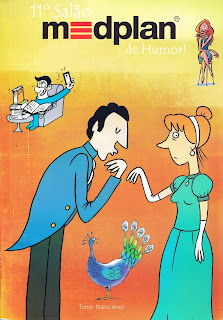 Received yesterday the color catalog of the 11th Salão Medplan de Humor 2019, Brazil + the 2020 calendar showing the awarded works in the event. The book is 20.8x30.7 cm in size and arrived a bit damaged in the post which is no surprise nowadays! It has 80 pages and contains the awarded + selected cartoons of  the 11th Salon with theme Narcissism.
The awarded + selected works in the Caricature section are also included in the catalog in 18 pages, each with 3 portraits on average. There are the awarded + selected works in the Comic Strip section in 6 pages. Yet not finished: in the following 5 pages are the awarded + selected works by young cartoonists that took part in the 2nd Salãozinho Medplan de Humor 2019. Totally are 216 cartoons/caricatures covered in this great catalog.
It is noted that they received 1.445 artworks from 41 countries mostly via internet I suppose. While this helps more artists to participate, it might have some negative consequences: The files of some cartoons are of less weight so that they are not clear enough on the printed page. This is obvious in the Honorable Mention winning charge in the event: the contour lines are all blurred. Some other works in the catalog also lost some effect due to this technical matter. This makes one contemplate on why some organizations still insist on accepting only original works, or some offer the prizes only if the originals are sent to the organization after the prizes are awarded to the electronically sent in works.
Engin Selçuk, Menekşe Çam, and Oğuz Gürel are the cartoonists from Turkey whose works are published in the catalog.
Possibly because this event was announced through some emphasis on taking a selfie, there are a lot of works depicting the act. And that is the reality of these days of course. But the theme was Narcissism which has never needed a cell phone to manifest itself. The 1st Prize winning charge by Rafael Corrêa shows one of such instances and deserves the front cover page as well (Top).
Thank you to the organizers, esp. Welington Teixeira de Araújo Júnior, for sending me this super collection of international humor.