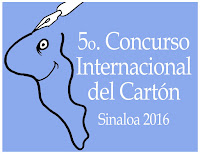 5th International Cartoon Contest Sinaloa 2016, México
1. PARTICIPATION
The Contest is open to all cartoonists from all over the world and beyond.
2. THEME: Organized crime
More than ever, especially from the beginning of this century, organized crime has become a serious threat to social stability in many countries. In these cases the control organized crime imposes is notorious. Through economical power and physical intimidation it has managed to infiltrate every level of official government. It is responsible for controlling the press and other mass media, even assassinating journalists. It is said that it sponsors political campaigns, buy judges and other important civil servants, including top military officers. It launders huge amounts of money and owns countless "legitimate" businesses. At times it shows off the weight of its power publicly. Finally, it is deeply involved in drug production, distribution and trafficking, kidnapping, extortion, trafficking in women, terrorism and arms sales, among many other illegal activities.
3. THE PRIZES
1st Prize: $27,000 Mexican pesos.
2nd Prize: $23,000 Mexican pesos.
3rd Prize: $17,000 Mexican pesos.
Winners will be notified by e-mail after 1st. September 2016.
4. ENTRIES
A maximum of 3 works can be submitted by E-mail in any media, in black and white or colour, but they should not be currently participating in other contests or have been awarded.
Works should have a minimum resolution of 200 dpi, size 21.5 cms x 27.9 cms. They should be sent to any one of the following:
camino2@prodigy.net.mx
camino3@prodigy.net.mx
concursosinaloa2016@gmail.com
5. DEADLINE: August 7th, 2016
6. PLEASE FILL IN THE ENTRY FORM AND SEND IT TOGETHER WITH YOUR WORK (The entry form can be downloaded from http://concursosinaloa2016.orgfree.com).
. Name
. Photograph
. Address
. E-mail
7. A catalogue with the winners and selected works will be available on the web page of the contest:
http://concursosinaloa2016.orgfree.com .
8. Participants that were winners in 2015 can participate but if they win again they will only be entitle to receive honorary mentions.
9. PROPERTY RIGHTS
Copyright belongs to authors. The Contest will use some works, but only for promotional purposes, such as publicity, the catalogue and the press.
Entry Form in WORD or PDF on source. 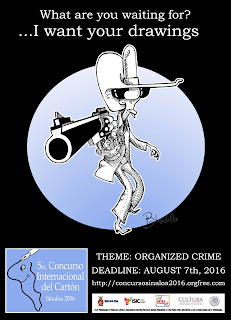