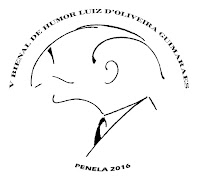 V BIENNIAL of HUMOR "LUIGI D'OLIVEIRA GUIMARAES" - PENELA 2016
An Organization: Municipality of Penela / Junta de Freguesia do Espinhal
A production: Humorgrafe - Artistic Director: Osvaldo Macedo de Sousa (humorgrafe.oms@gmail.com)
1 - Theme: "From Honey to Sting" invite artists from around the world to philosophize about the role of bee / honey (and other derivatives, in addition to their role in biodiversity) in our society and at the same time, the role of humorist / cartoonist. We cannot forget the allergies that were developed against the sting of satire / irony, the fear of the terrorist wasp that has killed, persecuted and oppressed philosophers of freedom and actuality which is facing an important moment in the game of tolerances and intolerances. Let us not forget that integration only works when the other also integrated, tolerance requires tolerance, and intolerance creates intolerance.
2 - Open to the participation of all graphic artists with humor, professional or amateur.
3 - Deadline: 25th of June 2016. They should be sent to humorgrafe.oms@gmail.com, humorgrafe@hotmail.com or humorgrafe_oms@yahoo.com (If you do not receive confirmation receipt please resend new email).
4 - Each artist can send via e-mail in digital format (JPEG 300 dpis A4) up to 4 works in black and white (one color with all its nuances - not accepted drawings with 2, 3 or 4 colors – is compulsory that two should be on this subject, and the other two can be portraits-caricatures of cartoonists - self-caricature or any of your country masters), open to all techniques and styles as caricature, cartoon, humor design, strip, bd board (story in a single board) ... which must be accompanied with information of name, date of birth, address and e-mail.
5 - Entries will be judged by a jury consisting of: representatives of the Municipality of Penela; representative of Junta de Freguesia do Espinhal; representative of the family Oliveira Guimarães; the Artistic Director of the Biennal; a representative of the sponsors, a local media representative and two guest artists, and will award the following prizes:
* 1st Prize V BHLOG- 2016 (€ 1,800)
* 2nd Prize of V BHLOG- 2016 (€ 1,300)
* 3rd Prize of V BHLOG- 2016 (€ 800)
* Humor Revelation Prize V BHLOG- 2016 (€ 250) (for national authors under 25 years old).
The jury, at its discretion, may grant "Special Awards" (António d’Oliveira Guimarães, Municipality of Penela. Junta de Freguesia do Espinhal and Humorgrafe), an honorific title, with a trophy.
6 - The jury grants the right to make a selection of the best works to exhibit in the space and catalog edition (which will be sent to all artists with works reproduced).
7 - The Organization shall inform all artists, by email, if they were selected for the exhibition and catalog, and also the winning artists. The works awarded, are automatically acquired by the Organization. The originals of the winning entries must be submitted to the Organization (the original work made by computer is a high quality print in A4, with hand signature and numbered 1/1), because without such delivery, the monetary prize will not be unlocked.
8 - Reproduction rights are owned by the Organization, to promote this event, and eventually will be discussed with the authors in the case of other uses.
9 - For further information contact the Artistic Director: Osvaldo Macedo de Sousa (humorgrafe.oms@gmail.com) or V Biennial of Humor Luíz d'Oliveira Guimarães Culture Sector, Municipality of Penela, Town Hall Square, 3230-253 Penela - Portugal.
10 - The V Biennial of Humor Luíz d'Oliveira Guimarães - Penela 2016 takes place from 3 to 21 September in the Cultural Center of Espinhal, but the woks can also be exhibited in other locations to be designated.
Source: fb.

When are the results getting declared..