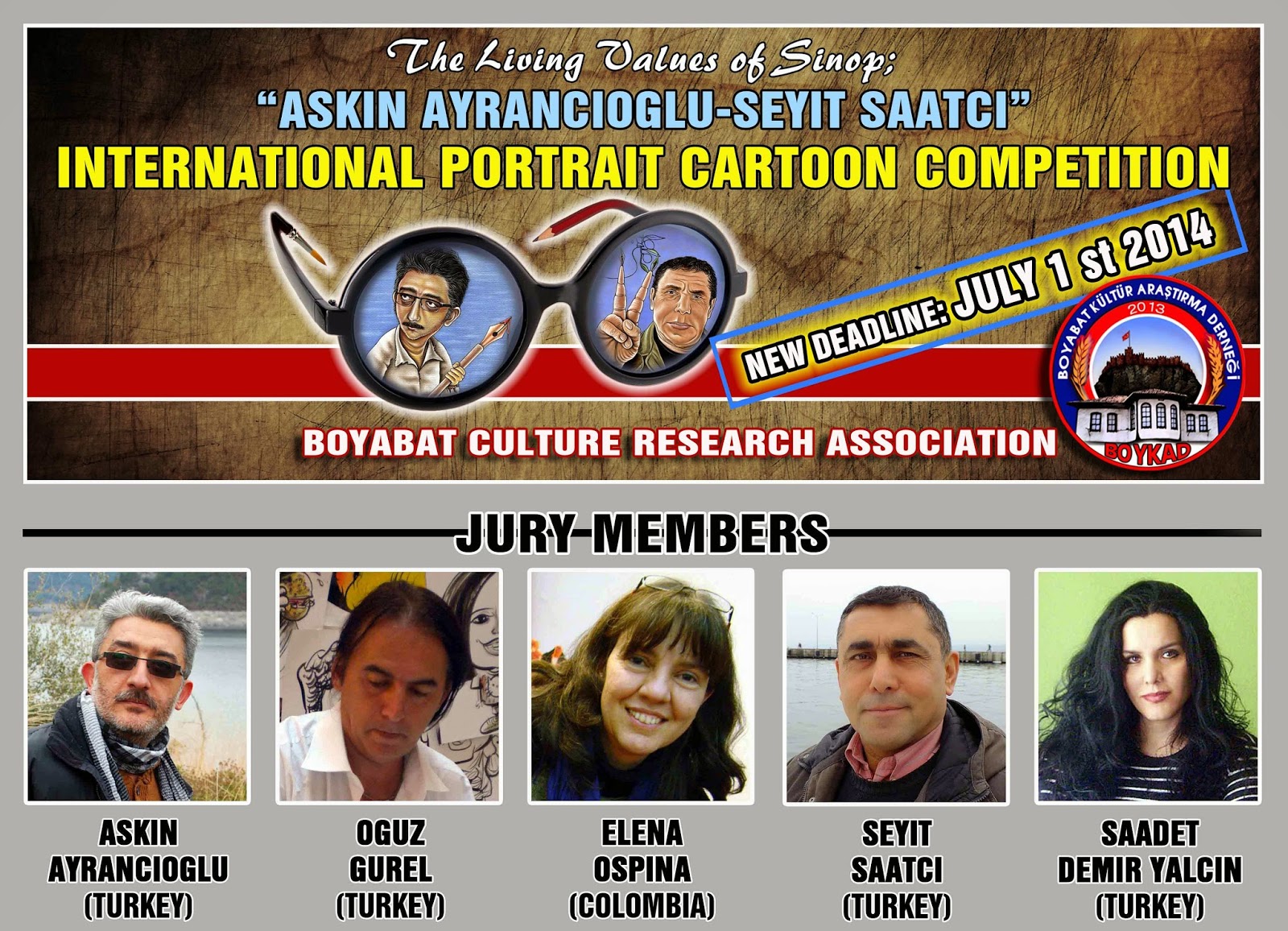 (The Living Values of Sinop; Askin Ayrancioglu and Seyit Saatci)
INTERNATIONAL PORTRAIT CARTOON COMPETITION 2014
Artists are generally remembered after they die. Activities are organised for them. However, we wanted to remember and make other people remember Askin Ayrancioglu and Seyit Saatci who are working and productive workers in the in the branch of international cartoon not only in Sinop but also in our country. We wanted give other cartoonists portraits as a gift to Ayrancioglu and Saatci because they represent Sinop and Turkey successfully in the branch of international cartoon.
1- The contest is open to all amateur and professional cartoonists.
2- The topic of competition; The portrait of cartoon artists; Askin Ayrancioglu and Seyit Saatci…
3- You can reach the photos of cartoon artists, Askin Ayrancioglu and Seyit Saatci; from the links below;
http://www.boyabatsanat.com/?subaction=showfull&id=1393548250&archive=&start_from=&ucat=1&
http://www.boyabatsanat.com/?subaction=showfull&id=1393724934&archive=&start_from=&ucat=1&
4- The technique is free. The work of the cartoonist may have been published before. However, it cannot have won any awards previously.
5- A cartoonist can join the contest with maximum of 5 portrait cartoons, but each cartoonist can only have one award.
6- The maximum size for the cartoons must be A3 (29,9cm X 42cm), 300dpi by width in jpg format.
7- The cartoons must be sent to the following e-mail address until (1st June 2014, EXTENDED:) 1st JULY 2014: asportraitcartoon@gmail.com
8- The contestants are expected to write their name, surname, mail address, e-mail address, and short bio and send them in a word file with an attached photo.
9- The works which won awards and are to be exhibited will be in an e-album and in internet issued.
10- AWARDS:
5 Crystal Medals (for Askin Ayrancioglu’s portrait)
5 Crystal Medals (for Seyit Saatci’s portrait).
11- The jury members: Askin AYRANCIOGLU (Turkey), Oguz GUREL (Turkey), Elena OSPINA (Colombia), Seyit SAATCI (Turkey), Saadet Demir YALCIN (Turkey).
12- The cartoons will be kept in the archive of the institution and can be used in posters, handouts, calendars, magazines, and newspapers. The publication will be sent to the holder of that cartoon.
13- By sending his/her works, and participating in the contest, the cartoonists agree to the mentioned rules and conditions.
14- The institution organising the competition: BOYABAT CULTURE RESEARCH ASSOCIATION, Ozel Idare Carsisi, BOYABAT / SINOP / TURKEY. 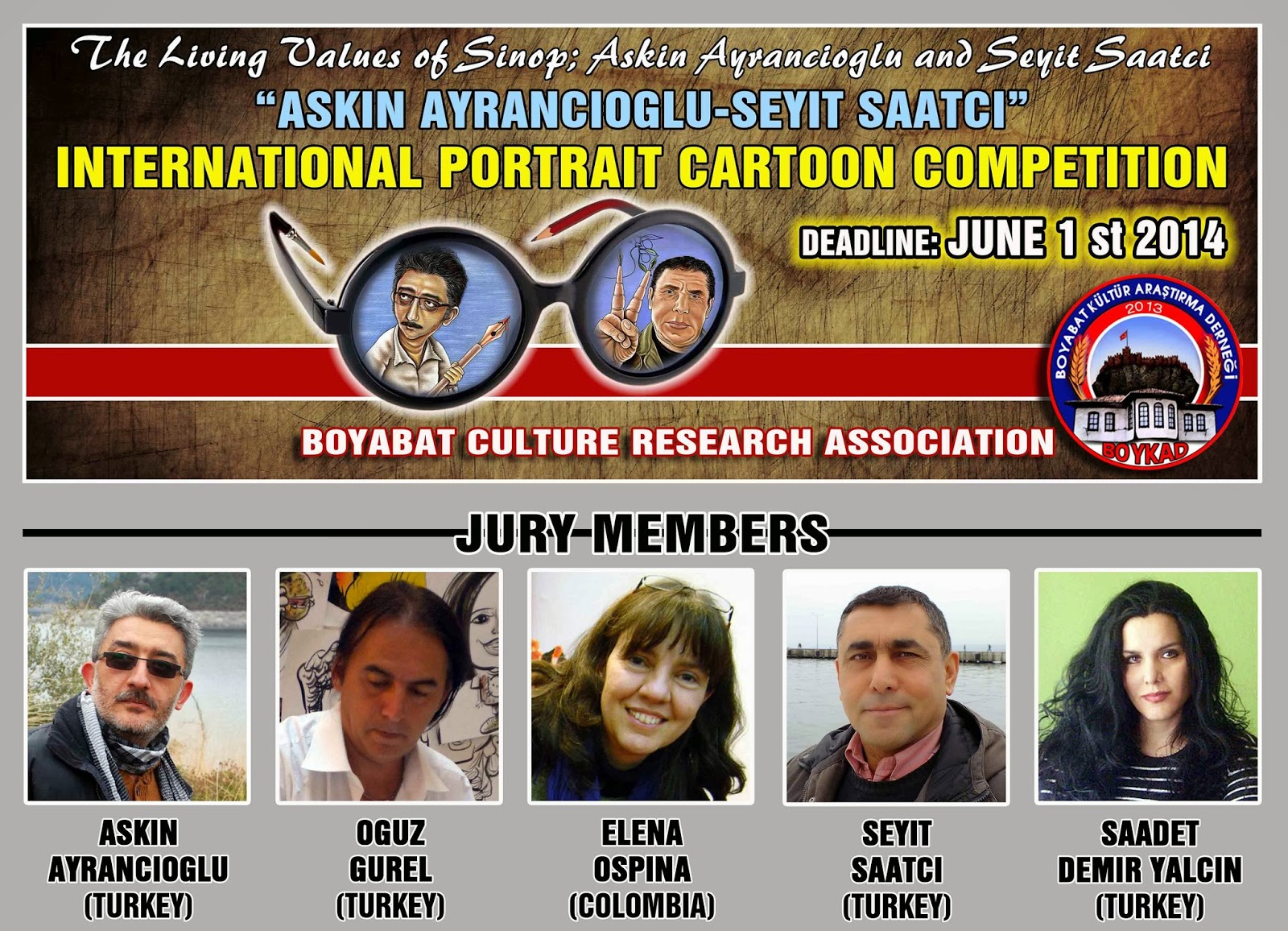