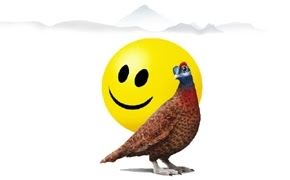 REGULATIONS OF IRONIC CARTOON COMPETITION «The Famous Grouse» 2012, Russia
In 2001 scotch whisky brand The Famous Grouse got acquainted with Cartoonists’ Guild of Media Union of Russia and participated in opening of International exhibition “Gagarin’s Smile”. We had a chance to appreciate the talent, creative approach and humor of Russian cartoonists and their foreign colleagues.
It is a well-known fact that Scots possess the wonderful gift of humor and self-irony, so the decision to carry out the brand own competition happened to be quite evident. Well, The Famous Grouse announced launching International Competition of Ironic Cartoon.
Topics of the competition:
•Birds – and the most famous of them, the Grouse
•Alcohol drinks – and the most popular of them, Scotch
•Famous countries – and the most famous of them, Scotland
Rules for participation:
The competition is open for professionals and amateurs on all continents. Each participant can present to the jury up to three works on each topic.
At least one work in each topic should be devoted to the Grouse, to scotch or to Scotland relatively. Combining several topics in one cartoon is an asset.
No limits are set on choosing the color of the style of work.
To become participant of the competition one should register on http://www.crevic.com/ and download one’s works on one’s page (unlimited number of works). After that one should add the work to The Famous Grouse ironic cartoon competition by ticking the box next to the work. All additional information on the competition will be available on the page of this competition on http://www.crevic.com/ . By adding the work to the competition the participant confirms transferring all financial rights on utilization of the work in POSM and printed production, in Internet placement and any other utilization to the organizers of competition. Works submitted for competition and chosen for the exhibition can be used in decorating the events organized by The Famous Grouse brand.
The works will be accepted from April 5, 2012. The deadline for sending the works is June 17, 2012. The required size of works is A4 format (297x210 mm) 300 dpi, RGB, JPG, the highest quality possible.
International jury of the competition:
Victor Bogorad, artist (Russia)
Anatoly Vasserman, journalist and public character (Ukraine)
Bairam Gadzhiadze, artist, President of Cartoonists’ Union of Azerbaijan
Svetlana Kruglova, fine art expert, Director of Surgut Arts Museum, organizer and the head of “Karikaturum” biennale (Russia)
Nurali Latypov, writer, member of “What? Where? When?” Club. The winner of the Club’s first prize “Chrystal Owl”
Andrei Ryzhov, artist, President of Cartoonists’ Guild of Media Union of Russia (Russia)
Andrei Feldstein, artist, founder and Director of International Forum Cartoonion http://www.cartoonblues.com/ (USA)
Tatiana Korneeva, Senior Brand Manager The Famous Grouse (Russia)
By the results of the jury’s work short list will be compiled of the works claiming for prizes. Short list will be announced on http://www.crevic.com/ for open discussion not later than June 22.
The winners of the competition will be announced on July 5.
The exhibition of the festival works will take place in Moscow and in St.-Petersburg
Prizes:
Grand Prize of the festival – trip to Scotland for 2 for 5 days including visit to The Famous Grouse distillery
Special and personalized prizes from The Famous Grouse.
Organizers maintain the right to print the works, which will be exhibited, in the catalogue.
Source: http://www.crevic.com/1346/ .