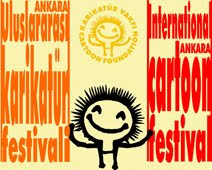 The international 7-77 Cartoon Competition will be organized under the 17th International Ankara Cartoon Festival. The aim of the competition is to make children familiar with the art of cartooning and to contribute the development of sensitivity towards humour by enriching their world with the help of cartoons you will draw.
All proffessional and amateur cartoonists will be welcomed to join in by drawing cartoons for children.
Cartoons can be drawn in black-white or colourful using any technique in either A4 or A3 size.
Cartoonists can join in the competition with an original cartoon that can be understood by children. Competitors must write their names, surnames and addresses on the back of their cartoons.
The deadline for the competition is February 15th, 2011.
Cartoons should be sent to the following address:
ULUSLARARASI 7-77 KARIKATUR YARISMASI PK:364 YENISEHIR 06443 /ANKARA/ TURKEY
The sole prize of the competition is the 7-77 PRIZE ($2,000) and the institutions’ commemorative plates.
The results of the competition will be announced on April 1st, 2011 in the local press and on the web.
The winner of the competition will be invited to Ankara from April 15th to 18th, 2011 as a guest for the activities to be held during the 17th International Ankara Cartoon Festival and will receive the award at the opening of the exhibition.
The International 7-77 Cartoon Competition catalogue and the certificate will be sent to those competitors whose cartoons were chosen by the jury and were printed in the catalogue.
Cartoons will not be sent back and all rights will be reserved by the Cartoon Foundation.
International 7-77 Cartoon Competition exhibition will be opened in various cities of Turkey and abroad.
NEZIH DANYAL
KARIKATUR VAKFI
PK: 364 YENISEHIR/ANKARA
http://nd-karikaturvakfi.org.tr/
Source: regulamentoscartoon