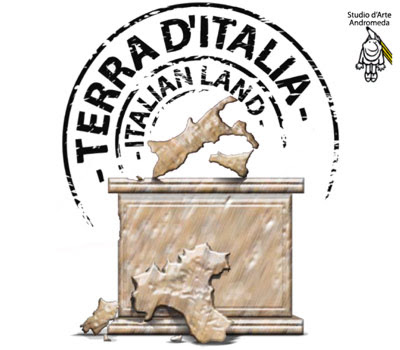 20th International Satire Exhibition “Trento between reality and madness” - Italy
Subject: Italian Land
On 2 August 1847 the Austrian chancellor Klemens von Metternich, wrote: “The word Italy is a geographical expression...”
After 13 years Italy became a State despite the skepticism of those who pretended to forget that the word “Italy” to the greatest artists of Europe meant more than just a geographical oddity, but represented civilisation, knowledge, culture, art and all the highest expressions produced by humans throughout history.
The most enlightened leaders of world culture, for centuries, considered the “Grand Tour”, travelling in Italy, as an essential step in their education and training.
What remains today, after 150 years of that hope to merge the different souls present on the peninsula called Italy and the desire to make a single witness and continuation of the immensity of which we are custodians of gifts?
Our review of XX satire is devoted to a discussion on Italy, which for us is first of all, cultural identity, identity that we feel, every day, in danger of extinction.
We are dealing with a world that continually sacrificed in the name of globalising short term illusions, that wealth of knowledge built with slow wisdom from those who lived with the thought, turning to us, to the future.
To you, to your poetic, ironic, irreverent, bright, satiric ferocity, pick these signals, the thoughts and emotions related to the land of Italy and represent them in terms of your art and your land.
REGULATION
Authors may submit an unlimited number of works, Studio d’Arte Andromeda reserving the right to expose those, which, in its sole discretion, considers most adherents to the theme.
The works must be original, can be made with any technique, and must adhere strictly to the theme.
Maximum size allowed: A3.
The works must arrive at the Studio d’Arte Andromeda via Malpaga, 17 - 38122 Trento ITALY, before (DEADLINE EXTENDED) 15 May 2010.
The date of the inauguration will be notified in time to all participants.
The works will be returned on demand.
The Organisation Committee will keep the prize-winner and signal works.
The Studio reserves the right to print a catalog with the most significant works and the right to use the same access to information, news and documents about the exhibition.
The catalog will be delivered during the opening or sent on request with the works.
Studio d’Arte Andromeda don’t answer of possible damaged or missing works, but maximum care of the delivered works is assured.
The contest has the following prizes:
1st Prize: € 1000,00
2nd Prize: € 700,00
3rd Prize: € 500,00
Visitors Prize: € 300,00.
Complete regulations & Participation Form: fanofunny .