World Press Cartoon 2008 concludes
Meeting in Sintra on February 11, 12 and 13, 2008, the Jury for the fourth World Press Cartoon event were presented with a total of 563 works in full conformity with the regulations. An overall total of 766 cartoons were received, from 395 cartoonists, published in some 367 newspapers and magazines in 67 different countries. Much to our regret, some excellent quality work had to be excluded from competition as it was not presented on its page of publication (or either only a photocopy or digital reproduction of the respective page was submitted). Others were not accepted as they had either been published for the first time prior to 2007 or because the originals displayed differences to the published work. The regulations require the sending of the original file in order to prove the techniques involved where digital processes are used. Unfortunately, some cartoonists merely sent the scan result of the originals produced by traditional techniques.
The Jury hereby reiterates that the organisation cannot jeopardise the position of all the entrants that meet competition rules and requirements. Such stringency is essential to the sustainable affirmation of the World Press Cartoon reputation as an event of excellence. It is essential that the authors provide proof of publication within the terms of the regulations and print the entire page with the date clearly visible.
The cartoonists who incorporate digital techniques into their work are to submit the respective working file for Jury analysis. This is in no way to hinder competition participation but rather to best evaluate, handle and judge the worth of the respective work. This is a competition for originals and there is no better means than providing detailed information, for ensuring more sustained and informed jury decisions. The rising profile of World Press Cartoon within the professional field has resulted from efforts to foster continuous improvement, high standards and the systematic application of criteria for quality. Thus is it possible to guarantee respect for the specific nature of the World Press Cartoon event, an annual exhibition of the best printed graphic humour.
Over its three days of work, the Jury selected the works to be included in the exhibition and the catalogue for each category. The organisation further presented to the Jury, for possible selection, works that while not meeting some facet of the regulations did stand out for their quality. Those works thereby selected are published in this catalogue entitled OC (Out of Competition) and form part of the exhibition. A total of 75 works make up the Caricature category, with 175 Gag Cartoons and 153 Editorial Cartoons. This adds up to a total of 403 works from 289 cartoonists, submitted from 58 countries and published in 276 newspapers and magazines. Of the 403 selected works, 63 are OC.
Despite extensive geographic and cultural coverage, as would be expected given the defined objective of a universal scope and range, it is always difficult not to overlook work from more peripheral countries, where often the media may have far more limited resorted or where freedom of expression is still repressed or taking its first steps. However, quality criteria should also be universal. For those who, perhaps due to such reasons, were not included for selection this year, a word of encouragement and an appeal to please come back still stronger in 2009. We are certain that in studying the standard set by the great cartoons featured in this catalogue, as you progress in your artistic and editorial creativity with talent and originality, the results of all such efforts will be rewarded by inclusion in forthcoming World Press Cartoon events.
The Jury attributed the nine awards and from the winners of each category a Grand Prix was awarded. On the grounds of outstanding graphical and editorial quality, twelve honourable mentions were also attributed.
WINNERS 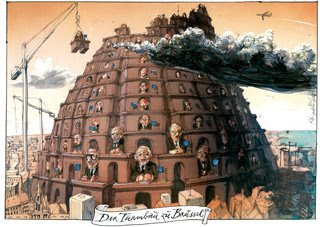 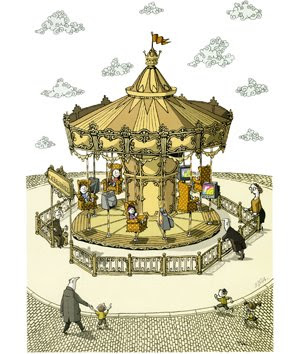 very nice! I love your pictures...