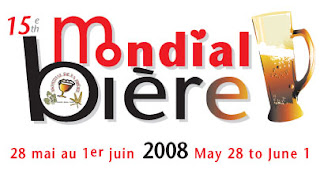 First International Cartoon Beer Contest
MBière Mondial de la Bière Mondial de la Bière, 2236, Beaubien East, Montréal, (Québec) Canada H2G 1M7 • Phone: 514-722-9640 # 442 • FAX: 514-722-8467 •
For the 15th anniversary of the Mondial de la bière, we are pleased to announce the first International Cartoon Beer Contest.
The contest will be announced February 11th 2008 via the internet. Judging will take place on May 28th 2008 with a panel of International Judges. Their decision will be final.
Announcement of the winners will be made on May 30th 2008.
Winners and selected cartoons will be seen on the website at www.festivalmondialbiere.qc.ca
RULES AND REGULATIONS:
1) The contest is open to anyone aged 18 years or older. All contestants accept the conditions and provisions included in the official rules and regulations. The original art work together with signed entry form must be received by May 10th, 2008. Participation to the contest is free of charge, the participants are responsible for delivering their work at their own expense to: Cartoon Beer Contest
c/o Mondial de la bière
2236 Beaubien East
Montréal, Québec
Canada H2G 1M7
E-mail will be sent to contestants to confirm the registration. If you want to deliver your work electronically send it to: olegderg@hotmail.com and infombiere@globetrotter.net
2) Theme: Beer, beer and women, beer and humour, beer and love, beer and sports, beer and history, beer and fun, beer and global warming, beer and politics, beer and ecology etc. etc. You may choose any humorous beer related theme to inspire your original cartoon, comic strip, caricature or gag. For comic strips we ask artists to include 3 to 4 frames on one page.
3) Entries: participants may submit a maximum of 3 cartoons, or comic strips.
a) The cartoons must have never been exhibited in Canada, or have won an award in a previous competition.
b) The cartoons may bear no captions, except for comic strips.
c) The cartoons must be sent flat without folds, or rolled in a tube.
d) The participants are responsible for the originality of their cartoons. Discussions and claims related to the originality, privacy, property rights, and or good taste of the work is the responsibility of the participant. The cartoons will not be returned and will belong to the permanent collection of the Mondial de la bière.
4) a) Dimensions of the cartoons. Cartoons should be 21.5 cm x 28 cm or, 11 inches by 8 inches (horizontal, or vertical).
b) Cartoons that are submitted under glass, framed or on other materials than paper as a support will be rejected from the competition.
5) Property rights, By agreeing to take part in the contest the participants renounce their property rights on the work submitted, thus empowering the organizing association to make use of their entries for promotional purposes on behalf of the International Concours bières bandes desssinées - Cartoon Beer Contest. This includes use of their entries by sponsors for publicity, publicity in the media, cartoon books, posters and or catalogues, folders, calendars or other promotional materials etc. Entries may be used for official gifts by the festival organizers.
6) Jury. A first selection of all entries will be made by the Head Judge the Honourable Oleg Dergachov in preparation of the final judging that will be done by an International team of expert judges. The judging will take place on May 28th 2008 in Montréal, Québec, Canada. The International jury will include professional cartoonists, and or art critics, and possibly a representative of a major sponsor and also one of the festival. A minimum of 6 judges will be on the jury. (Jury members: John A. Lent, Svetlana Kruglova, Guy Badeaux, Aislin ( Terry Mosher), Tina Seemann. Source: http://www.cartoonblues.com/forum/viewtopic.php?t=3141)
7) Prizes
Golden Mug — First prize cash award of $1,500 CDN, dyploma and Trophy
Silver Mug — Second prize cash award of $1,000 CDN, dyploma and Throphy
Bronze Mug — Third prize cash award of $500 CDN, dyploma and Trophy
Source: http://www.cartoonblues.com/Contests2008/Contest_2008May_Montreal.html
___________________________________________________________________
Entry form:
Name:
Date of birth:
Address:
Country:
Zip code:
Tel:
FAX:
E-mail:
I agree to the rules and regulations of the International Concours bières bandes desssinées - Cartoon Beer Contest. No entries will be returned to the participants, and will remain the property of the festival. The cartoons may be used for promotional purposes as described in the rules and regulations. Legal responsibilities related to the work submitted remains the responsibility of the author of the cartoons or comic strips.
Signature