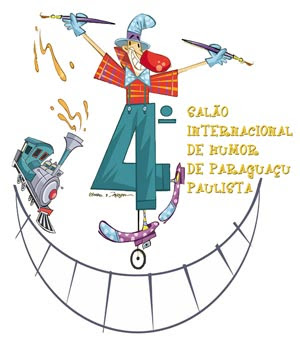 4th Salon of Humor from Paraguaçu Paulista International BRAZIL
Deadline: July, 18 2008
Dates:
Registrations until July 18, 2008.
Opening - August 29, 2008.
Participation: All the professional or amateur cartoonists can register unpublished works, since they have not been rewarded in another contests and expositions until the date of closing of the registrations (07-18-2008), and in the case of Comic Strip the character should be unpublished. Each author can register up to three (3) works for category, developed in any technique including them elaborated by computers. For each work correspondent a will own be filled (1) registration record. In the case of shipping for CD, to enclose file with the author's data.
Categories: The theme will be free for the four categories (Cartoon, Political Cartoon, Comic Strip and Caricatures) and with theme specified in Thematic Cartoon. The format will be the A3 (297 X 420 mm) without frames and mounted on cardboard in the case of the originals. In the category Comic Strip three will be accepted (3) boards with at the most four (4) comic strip in each board (format A3).
Exceptionally in 2008 we have a Mangá category, where the author may send up to 3 boards containing a complete history on each plate always in the format A3. The theme of the Mangá category will be free with new character.
All the works, besides the works done with the hands, they can be correspondents for e-mail or CD, digitalized in 300DPI, color way RGB, in the format JPG (high quality) or PDF obeying the maximum limit of 1,5 MB. The works can be sent through this site in the section Record of Registration.
Cartoon - Joke graph with universal theme and temporaries.
Political Cartoon - graphic Representation criticizes and well tempered of a political fact and/or social on present time.
Comic Strip - graphic Humor in sequence tans of pictures similar to published them in newspapers.
Caricature - graphic Representation with well tempered anatomical alteration of well-known personalities.
Thematic Cartoon - That category will have a specific theme - "TRAIN"
Mangá - History in Comics with traits characteristic of Japan.
Award: Three will be checked (3) prizes for each category. In the total of R$ 21.000,00 like this divided:
Six prizes of 2nd place, in the value of R$ 1.000,00 each, distributed among the categories;
Six prizes of 3rd place, in the value of R$ 500,00 each, distributed among the categories;
All the categories will have three Honorable Mentions through diplomas totalized 18 mentions.
The values of the prizes for the international works will be transformed with base into the value of the Commercial Dollar of the date of the award (08/29/2008).
NB.: The award jury the right is reserved of not destining prizes to the categories that don't reach the enough level, transferring for another categories, or creating a reward special of the Saloon.
When registering in the Salon, the author automatically transfers the Cession of the copyrights of your work(s) when winning, getting, in a total, universal and definitive way, in all the use modalities and gratuitous title, that starts to integrate the Patrimony of the Saloon of Humor from Paraguaçu Paulista in Brazil for all the right ends.
In case the award jury verifies some fraud species or plagiarism in one or more registered works, it can cancel the reward checked. The works will be disclosed in the site of the Saloon after the inauguration of the same and they can be answered up to 10 days after the opening of the living room, with fitting tests of any irregularity made from the jury.
Other prizes and mentions can be instituted the approach of the Organizing Commission.
Works out of the regulation or considered plagiarisms will be automatically declassified.
Registrations: The works should be correspondents for the following postal address:
Salão de Humor de Paraguaçu Paulista, Avenida Aeroporto S/N - Centro de Convergência Turística, Jardim Aeroporto / Paraguaçu Paulista - São Paulo – Brasil CEP 197000-000.
Tel. +55(18) 3361-6165
until July 18, 2008 (it is worth the arrival date)
E-mail: salao@salaodehumordeparaguacu.com.br
Site: http://www.salaodehumordeparaguacu.com.br/
The works will be returned until one year after the closing of the event, on December 29, 2008. In case the artist wants to receive its work before, it should remove in the Salon.
(Source: http://www.brazilcartoon.com/)