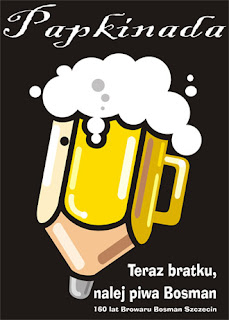 The PAPKINADA 2008 International Cartoon Contest is an open competition. The objects of the competition are drawings, graphics and other works of fine arts and photography created with the use of optional techniques, being originals, and qualified by artists to: “Now, mate, pour some Bosman Beer. 160th Anniversary of Bosman Brewery Szczecin”
WORKS AWARDED IN OTHER COMPETITIONS will be excluded from the competition. The format of the works - maximum A3 (297 x 420 mm). Works should be sent or delivered by July 1, 2008, packed in a protective cover to:
”PAPKINADA 2008”
Kołobrzeskie Stowarzyszenie Inteligencji Twórczej
Ul. Krakowska 12, 78-100 Kołobrzeg POLAND
Organisers are not responsible for transport damages.
THE PARTICIPANTS ARE KINDLY ASKED NOT TO POST THE WORKS VIA ELECTRONIC MEANS AS THESE WILL NOT BE ACCEPTED FOR THE COMPETITION.
Participation in the competition is free of charge. However, the organiser reserves the right to include one of the submitted works in the Papkinada Gallery. The work, chosen by the author, will in this way cover our costs of mailing (please use capitals). Works should be accompanied by their author's photo or caricature, a short biographical note and a filled application card.
PRIZES
The Jury will award the following prizes:
GRAND PRIX PAPKINADA 2008 - 3000 PLN
The Jury has the right of final distribution of the statutory prizes, change of their amount, or non-awarding them or non-awarding the GRAND PRIX PAPKINADA 2008. The Jury's decisions are final.
The competition results will be announced on July 30, 2008 at PAPKINADA web site: http://www.papkinada.prv.pl/
N o t e ! Awards are subject to taxation according to the current regulations. The condition to pay the authors is their arrival for the opening of the exhibition and collection of their awards by December 15, 2008, or indicating a bank account the money should be transferred to.
PRIVILAGES OF PARTICIPANTS
Authors of work qualified to the exhibition are given a presentation copy of the exhibition catalogue and a free-of-charge place in the catalogue. The organisers provide the competition prize-winners with gratuitous participation in the PAPKINADA 2008 event on August-September, 2008. Works sent to the exhibitions will be exhibited in the country and abroad after the main exhibition, and then will be returned to their authors by the end of 2009.
FINAL PROVISIONS
The organisers reserve the right to use the sent works for PAPKINADA advertising purposes without any special fees paid to the authors: to be exhibited and reproduced in a variety of advertising materials, as well as printed and circulated in catalogues.
The prize-winning works become the property of the organisers and will be included.
The exhibition organisers are the finial judges in interpretation of the regulations.
Sending his work the artist agrees to the mentioned above rules and regulations and agree to the publishing of the author's profile in the post-exhibition catalogue.
Kołobrzeskie Stowarzyszenie Inteligencji Twórczej is the organiser of the PAPKINADA 2008 International Cartoon Contest. The Gallery of Contemporary Art and Polish Cartoonists’ Association are the co-organisers.
TIMETABLE
Deadline for works reception (Extended: http://www.spak.art.pl/index2.php): July 10, 2008
Jury meeting July 15-17, 2008
Post-competition exhibition August 30, 2008
Return of works after the exhibition cycle December 31, 2009