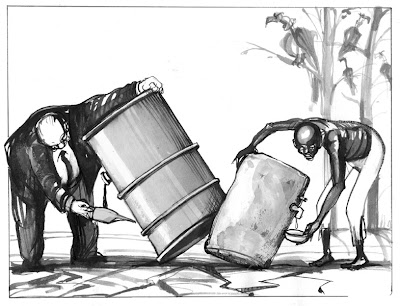 Results of Africa on Rise Global Cartoon Contest
Theme: Africa: No Opportunities, Continent of Crisis or Renaissance
Dear Cartoonists, Ladies and Gentlemen,
The decisions have been made: in early November 2007, the jury met in Frankfurt/Main to select the winners of our cartoon competition 2007. The 1st prize (3.000 Euro) goes to Jonathan Shapiro /Zapiro (South Africa), the 2nd prize (2.000 Euro) to René Bouschet (France) and the 3rd prize (1.000 Euro) to Wolfgang Ammer (Austria) (see top above). Siphiwo Sobopha (South Africa) (see below) received a special award (1.500 Euro) from the German Federal Ministry for Economic Cooperation and Development (BMZ). 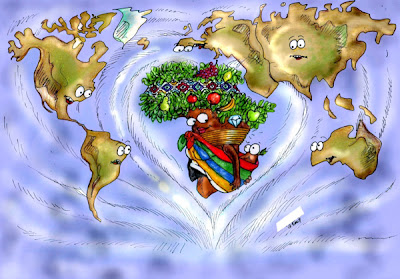 Congratulations to all the winners!
The winners were introduced to the public on Monday, 3rd December, 2007 at a press conference at the French Dome in Berlin, organised by the editors of the new monthly magazine"welt-sichten“, a “merger” of the magazines "eins entwicklungspolitik" and "der überblick".
In the evening, the awards were presented to the winners by the German Minister of Economic Cooperation and Development Heidemarie Wieczorek-Zeul during the Development Policy Media Prize award ceremony organised by the German Ministry of Economic Cooperation and Development (BMZ) at the historical foyer at the KfW Banking Group in Berlin. The winners’ creativity was highly appreciated, as it helps to reduce prejudice and to overcome intolerance against the African continent. The decision to combine the cartoon award ceremony with the Development Policy Media Prize ceremony was acknowledged and appreciated by the expert audience.
2.300 cartoonists in all 191 UN member states and national and international cartoonists’ associations had been invited to participate in the competition. 230 cartoons were sent in, 37 of which came from Africa, 36 from Central and South America, only seven from North America, 88 from Europe and Turkey, 60 from Asia, and one from Australia. The independent jury this time included:
Marie-Roger Biloa (publisher and editor-in-chief of Africa International, Paris), Rainer Hachfeld (cartoonist, Berlin), Al Imfeld (writer, Zurich), Prof. Dr. Dieter Kramer (former curator of the Museum der Weltkulturen, Dörscheid), K. Friedrich Schade (former executive editor of the German development journal epd-Entwicklungspolitik, Schwalbach/Ts), Erich Stather (State Secretary at the Federal Ministry for Economic Cooperation and Development, Berlin/Bonn), Dr. Jasper von Altenbockum (chief of the political desk of the daily newspaper „Frankfurter Allgemeine Zeitung“ - FAZ).
We would like to thank all those who helped to organise the cartoon competition 2007, and especially the cartoonists from all over world who participated in the competition.
Dr. Konrad Melchers (executive editor of the German development journal “eins Entwicklungspolitik”) and Jürgen Weber (Project Manager).
See prize-winners and more cartoons at: http://www.alpha02.com/concc/contenido-4.6.8/cms/front_content.php