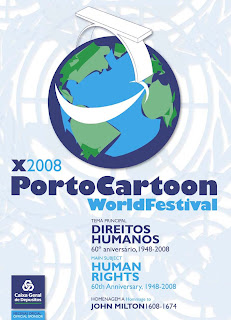 "Human Rights"
Theme PortoCartoon 2008
The Portuguese Printing Press Museum internationally launch the theme of the X PortoCartoon-World Festival ­ "Human Rights", on the same day that the heads of state of 27 countries of the European Union sign the new Treaty of Lisbon and approve the charter of fundamental rights of the European citizens.
With the choice of this theme, the organizer of PortoCartoon wants the cartoonists worldwide to focus on the continued violation of human rights in the 21st century, and after more than two centuries of French Revolution (1789).
According to the general rules of this contest “this is a subject that crosses the world, from the most assumed countries in matters of the rights legislation to the most retrograde in the law and its practise... The theme is even justified by the fact that every day there are individual, collective, social, economic and cultural rights in question.
As one of the most important rights is the freedom of press, it is also fair and opportune with this 10th PortoCartoon to evoke and pay tribute to John Milton, the author of the first speech on this topic. The poet of the “Paradise Lost” was born 400 years ago (1608) and his speech, named Areopagitica was made in the English parliament in 1644.
The active intervention of the cartoonists all over the world is very relevant on the 60th anniversary of the Universal Declaration of the Human Rights.
For those who eventually do not wish to participate under this theme, there will be a Free Category. The international politics, the social life, the communication and other themes can always be a way of expressing the humour art.
The winners of PortoCartoon will receive a monetary prize, the trophy of the festival, designed by Arqto Siza Vieira and special bottles of Port wine.
G. Wolinski presides to the international jury that has the following members: the President of FECO (Federation of Cartoonists’ Organizations), Marlene Pohle; representatives of the Ministry of Culture, the Faculty of Fine Arts of Porto, the Portuguese Printing Press Museum and any representatives of other institutions related to the cartoon.
The X PortoCartoon-World Festival has the official sponsorship of the Caixa Geral de Depósitos and will be inaugurated during the festivities of the city of Porto in June.
The PortoCartoon has been a space of excellence for humour worldwide and is considered by FECO (Federation of Cartoonists’ Organizations) as one of the three most important cartoon contests in the world, either for the participation number of artists worldwide and also for the value of its prizes.
The PortoCartoon began in 1999, and its exhibition receives every year thousands of visitors, both on the Portuguese Printing Press Museum installations and on the several cities and countries where is presented.
The works to the X PortoCartoon should arrive at the Portuguese Printing Press Museum (E.N. 108, nº 206, 4300-316 Porto, Portugal) with the entry form until 31 March 2008.
General rules http://www.cartoonvirtualmuseum.org/i_noticias_f_i.htm
The Portuguese Printing Press Museum
PORTOCARTOON-WORLD FESTIVAL
Porto - Portugal
Tel: 351 225304966
Fax: 351 225301071
Email: mni@museudaimprensa.pt
http://www.cartoonvirtualmuseum.org/