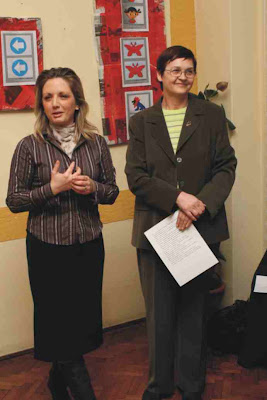 He was born in Chengdu City in 1962. Graduated from Shandong college of Art & Design, his major is Department of Graphic Art Design. He is graphic designer, oil painter, indoor decoration designer, illustrator, cartoonist. He is an Assistant of Arts Design Specialist and also a member of Si Chuan Artist Society Cartoon Researching Committee. By now he had issued more than 800 cartoons in many well-known magazines and newspapers in the world. His works have won many prizes such as in China, Belgium, Ukraine, Iran, Turkey, Brazil, Poland, Slovak, Sweeden, Germany, Israel and other countries in the world. Some of the cartoons had been collected by in international cartoon museums in countries. 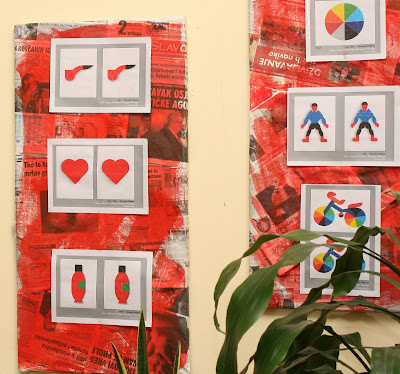 Four-shape Combina Diagram Design is designed according to the existent form of natural figures, and consists of small triangles, big triangles, semicircles, “J” shape, and sectors. Because the above four figures have math relations, they can be combined freely and changed continuously, they can also be combined into about 300 diagrams.
It is beneficial for people's intelligence and can also be used as jigsaw puzzle for the children.

Exhibition was opened by math teacher from elementary school “Jagoda Truhelka” Marija Arandelovic, classmistress of Stela Dusanic. She shared how it look like when she met Stela for the first time when she introduce her with the work of her dad Tomislav Dusanic – Tod. "That’s how work of Tod became a part of my life. A destiny of every teacher is to be connected with his students by the invisible filaments and from a distance monitor their lives. I cheer up when I found out that Stela is continue to go by the path of her dad – to lead a unique Cartoon Gallery in the world." 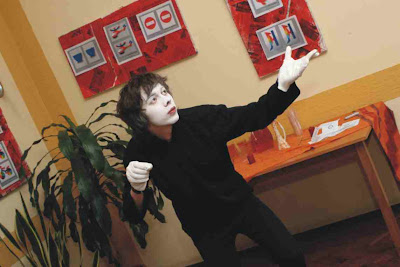 Ivan Balic have introduce himself by the pantomime called “Growing Up”. In that way he have embellish the opening night!

Exhibition, in any case, wasn’t accostumed!! It was awesome!