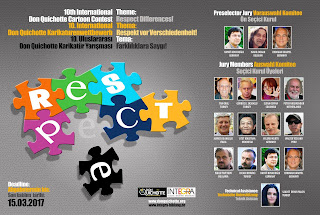 10th INTERNATIONAL DON QUICHOTTE CARTOON CONTEST 2017
Theme: “Respect differences!“
Societies differ based on their language, religion and racial features. These features create the basics of the “differences” description. In such terms, we may not talk about equality since every body has a different color. Amongst crowds, these concepts are unfortunately referred as discriminators. Whereas these differences should be seen as riches. Whilst facing differences, we should acknowledge everybody as they are and respect their differences. Respecting people’s thoughts, lifestyles, views of life are a must in the first place for societal values. These differences shouldn’t be a reason for imposition, othering and end up into opression. People’s values, lifestyles, visions, beliefs, anticipations, tastes, perceptions and interpretations pof the World may differ. All of them represents the riches of life. Acknowledging, understanding the other and whatever his/her differences are, knowing that he/she also owns all the rights we do, elevates our humanist side and universality.
In a society where some masses want the others to be just like themselves and rejecting the others’ cultural heritage representing the differences is a menace towards societal values. In any society, all the people must live in equal conditions and rights. Every race is different yet all create a harmony like a rainbow when joined. We deserve living in a colorful World independent of race, language and religion. Respecting the differences..
The purpose of our contest is to underline the difference while showing its importance to societies and implement it through the cartoon art.
The Rules of Competition:
1) With participation in competition is possible only by Internet. (respect@donquichotte.org)
2) All submitted work should be participating a contest for the first time. With an offence, there's a risk of deprivation of the achieved prizes.
3) The designs are to be drawn in A3 Size to deliver in 300 dpi dissolution and in Jpeg format. They know both and black-and-white, and to be colored, the coloured representation is exactly the same as the color technical treatment of the work is incumbent on not a containment.
4) The closing date of the competition is 15 March 2017.
5) Pre-selective Jury will determine the 100 finalists between dates 20-31st March 2017.
Finalists will be presented in social media and on DQ website for the following 10 days.
6) The jury exists, evaluates the works between 01 and 07 April 2017. Results of this evaluation and conception of the price-crowned works are published on 10 April 2017.
7) The award of the prize will take place in the context of the opening of the exhibition in 5 May 2017 in the municipal art gallery Filderstadt.
8) Received caricatures will be securely saved in Don Quichotte's archive. We certainly will get permission from you if we need to use your caricatures for purposes other than displaying it in exhibitions and album.
9) Contest Album will be developed in pdf and, if sponsored, will be printed.
10) Awarded and best performing cartoons will be exhibited in various European countries.
The Prizes:
- First Prize: 1.000 Euro +Don Quichotte Medal
- Second Prize: 750 Euro +Don Quichotte Medal
- Third Prize: 500 Euro +Don Quichotte Medal
- Special Awards
- 10 Mentions
Preselector Jury:
- Hayati Boyacıoğlu/Germany
- İsmail Doğan/Belgium
- Erdoğan Karayel/Germany
Jury Members:
- Tan Oral/Turkey
- Gürbüz Doğan Ekşioğlu/Turkey
- Elena Ospina/Colombia
- Peter Nieuwendijk/Netherlands
- Jitet Koustana/Indonesia
- Marco De Angelis/İtaly
- Walter Toscano/Peru
- Valeriu Kurtu/Germany
- Ivailo Tsvetkov/Bulgaria
- Hicabi Demirci/Turkey
- Hayati Boyacıoğlu/Germany
- Erdoğan Karayel/Germany
Technich Assistance:
Saadet Demir Yalçın/Turkey.
Source: facebook.
WEB: donquichotte.
*
First blogged: 01.01.2017 18:30.