Charlie - the greatest comedian of all times 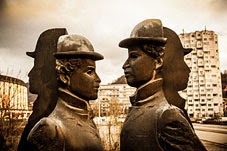 CHARLIE - THE GREATEST COMEDIAN OF ALL TIMES
On 16th April, 2014 will be 125 years since the birth of Charlie Chaplin and 100 years since the beginning of his film career. The House of Humour and Satire celebrates these remarkable anniversaries staging a thematic evening event dedicated to the life and the work of the inimitable comic actor. The event will open on 10th April, 2014 at 5.30 p.m. It is a fact that the town of Gabrovo boasts the one and only in Bulgaria monument to Charlie Chaplin sculped by Academician Georgi Chapkanov in 1983.
The programme of the evening event encompasses a presentation of little known data and incidents in the actor's life and the numberless monuments all over the world raised by his fans; fragments of popular silent films starring Charlie Chaplin; an exhibition of works from the Humour of the Peoples art collection that feature different images of Chaplin's, as well as an exhibition of the results of a photo competition under the heading Charlie and I in Gabrovo organized by the Museum HOUSE OF HUMOUR AND SATIRE.
www.humorhouse.bg