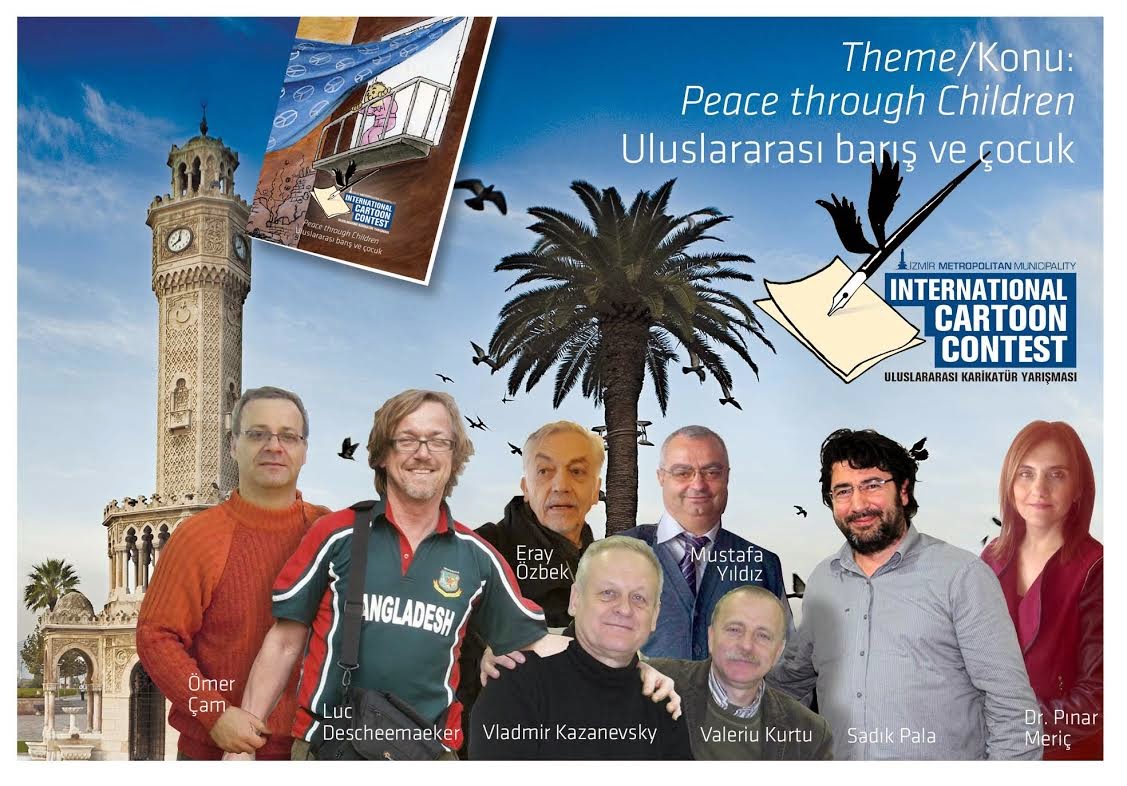 International Cartoon Competition “Peace through Children”
Objectives of the competition:
Sister and Friend Cities of Izmir gather around the International Cartoon Competition.
The competition is to be organized in order to contribute to the friendship of communities with the creative power of culture and art as well as strengthen friendship ties between cities. The theme of the competition, which will be held for the first time this year, is determined as “Children and International Peace” and the results will be announced on the 1st of September 2014, the World Peace Day.
Today, thousands of children lose their lives and are forced to leave their home lands due to wars. They become disabled, suffer from psychological problems and they are abused. In wars, mostly children die first and for those who survive; they don’t smile anymore since their dreams, hopes and future are taken away from them. Every child has the right to grow up in peace regardless of their color, language, religion and ethnic origin. Ensuring this is the joint responsibility of humanity.
With this consciousness, Izmir Metropolitan Municipality would like to invite the cartoonists living in our sister and friend cities to participate in the competition; we believe that their works will increase the sensibility and awareness for peace.
Rules of Participation:
• The International Cartoon Competition with the theme of “Children and International Peace” organized by Izmir Metropolitan Municipality is open to all cartoonists.
• Competitors who are under the age of 18 must participate in the competition with the permission of their parents. A document, which shows the acceptance of the conditions, must be signed by the parents and submitted to the Organizing Committee.
• Each competitor is allowed to participate in the competition with maximum 5 cartoons. The cartoons that will be sent to the competition may have been published previously; but had not been awarded from a competition. The cartoons that are found out to be rewarded before will be disqualified and the prize will be taken away.
• Participants who send cartoons to the competition are considered to have declared and committed that these works belong to themselves. Izmir Metropolitan Municipality does not accept any responsibility for permission and copyrights about the participants’ cartoons.
• The cartoons can be used on different platforms (brochure, exhibition, periodicals, calendar, etc.) with the artist's name by Izmir Metropolitan Municipality. Participants are considered to have accepted these conditions beforehand.
• Transportation and accommodation expenses of the winners will not be covered by Izmir Metropolitan Municipality. The prizes of the winners who could not attend the award ceremony will be deposited to their bank accounts.
• The cartoons which are found to be the most creative by the jury will be exhibited and will be put into an album. The cartoonists of all the exhibited cartoons will be offered or sent the album after the award ceremony.
• The cartoons that do not comply with the terms and conditions of the competition will be cancelled and disqualified from the competition.
Digital Delivery of the Cartoons:
• Applications will be sent via internet. Participants must fill in the application form on www.izmir.bel.tr/cartoon/en and click on the “Cartoon Competition” to upload their cartoons.
• The cartoons must be sent in A4 size (21cmx29.7cm) RGB color, 300 DPI resolution and JPG format. Any compressor programs such as ZIP or RAR cannot be used.