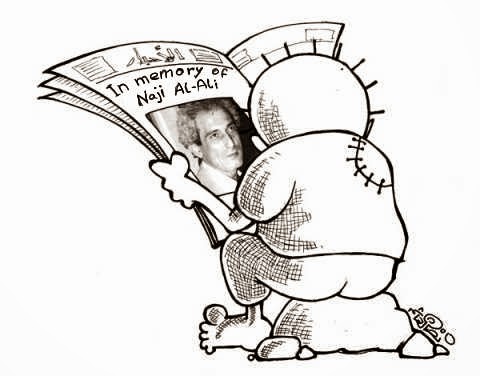 Naji al-Ali third edition cartoon award
Country: Jordan
Subject: Palestine
Last Participation Date: Friday, June 20, 2014
Participation way: Electronic.
The main topic of the competition is Palestine; the purpose of the cartoon must be related to the Palestinian Cause affair. Cartoonists, may participate in Cartoon which are talking about topics such as freedom, anti-occupation, the right of return, anti- aggression of Israel, the Israeli siege, the people’s right to resist occupation, promote a culture of resilience, anti-organized terrorism practiced by states, the supporting of occupation by U.S. and western states, Palestinian people’s suffering from the occupation, Palestinians’ suffering in asylum, Palestinian prisoners’ suffering in Israeli jails, racial discrimination suffered by Palestinians under the rule of Israel, Israel as a religious country....etc. The topic participation of the cartoon may also be involved in internal Palestinian topics such as the differences between the Palestinian factions.
Participation is open for all professional cartoonists from all over the world.
The Drawing size must be A3 or A4.
The drawing can be done either manually or by using computer techniques.
The participated drawings is limited at a maximum of five.
The participated drawings should be without inclement of a text
The joint works are not accepted. The work should be done solely.
The cartoons could participate whether where published or unpublished.
The participated cartoon shouldn’t win any prize before.
The cartoonist who won the contest shouldn’t participate again after at least three sessions.
The organizers of the competition, Al-bayyara Cultural Association and Palestine International Institute have the right to use the drawings for non-commercial purposes, it is also allowed for the website Arab cartoon house promote the participated works in the website and social networking pages.
The judges awarded one prize worth five thousand dollars for the winner, and they have the right to award it
to more than one cartoonist.
The last date for sending entries is June 20, 2014
Results announced on 20 September at a special ceremony called "cultural day for Palestine", which will be held in the Jordanian capital.
Participation is allowed only for registered members only.
Please note that each member can use the form only once, so please review the full processing before sending the form.
Source: arabcartoon.