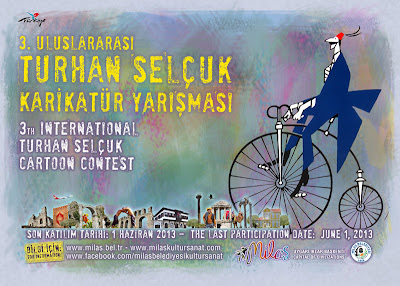 3th INTERNATIONAL TURHAN SELÇUK CARTOON CONTEST 2013, TURKEY
SPECIFICATIONS
SUBJECT: Free
CONDITIONS:
1- The contest is open to all cartoonists.
2- The caricatures may be published before the contest. But they shouldn’t be rewarded at another contest.
3- The technique is free. Cartoonists can join the contest with maximum 3 caricatures. But the arts must be original. Digital prints will be accepted only if they are signed by the artist with wet signature.
4- The maximum size for caricatures must be 30×40 cm.
5- The contestants must write their name, surname, address, e-mail, country, and their telephone numbers with the big letters at the back of the cartoon.
The contestants must put their CVs into the envelope.
6- The caricatures must be sent to the following address until June 1st 2013.
3. ULUSLARARASI TURHAN SELÇUK KARİKATÜR YARIŞMASI
Milas Belediyesi Kültür Sanat Birimi Milas – Muğla / TÜRKİYE
7- The result of the contest will be announced on the date of June 28th 2013.
8- The caricatures that are sent to the contest will not be posted back. The caricatures which are in degree or non degree can be published with cultural purposes.
The contestants who join the contests are acknowleding these conditions.
The caricatures will be kept in Turhan Selçuk Caricature House.
9- The contest album will be sent to the holders of the caricatures which will be selected by the Jury .
10- The award ceremony will be on the date of September 13st 2013. The gallery opening of the caricatures which will be exhibited and the caricatures which are awarded will be in Turhan Selçuk Caricature House. The gallery will be open until September 27th 2013.
11- The accommodation expenses of the winners will be paid. But transportation will be at their expense.
12- SELECTOR BOARD:
Muhammet Tokat ( Mayor of Milas)
Kamil Masaracı (Cartoonist)
Nadia Khiari (Cartoonist)
Cecile Bertrand (Cartoonist)
Gürbüz Doğan Ekşioğlu (Cartoonist)
Ahmet Büyükmehmetoğlu (Cartoonist)
Hatay Dumlupınar (Cartoonist)
Pelin Ünker (Cartoonist)
Bülent Örkensoy (Graphic Designer)
13- AWARDS:
The First : 3.000 USD
The Second : 2.000 USD
The Third: 1.000 USD
Other Private Awards:
Private awards by different enterprises, associations, newspapers, art magazines, agents, unions or persons.
Note: The Jury meeting will be done on June 22th 2013.
Source: milaskultursanat .