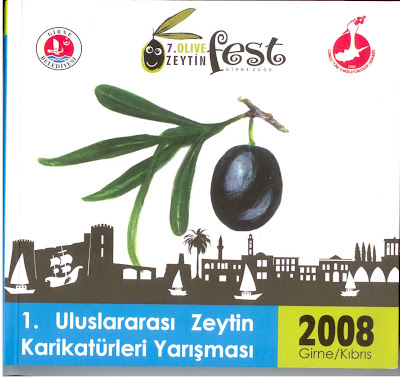 Today received from Cyprus the colossal catalog of the 1st International Olive Cartoon Contest organised in Kyrenia in 2008: 20x21.5x2 cm in dimensions and 208 pages fully in color.
As Sümer Aygın, the Mayor of Kyrenia Municipality, points out in his introductory words, the cartoon competition is part of the Olive Fest organised annually since 2002 involving musical and theatrical performances, folk dancing, art/sculpture exhibitions as well. 204 artists from 42 countries sent in 372 cartoons to compete in the first international contest in 2008. The olive-themed international cartoon competition organized jointly with the Cyprus Turkish Cartoon Association is now transformed into a traditional event and is very well recorded in this catalog with the short bios and declarations of the jury members and prize-winners in both Turkish and English languages, snapshots of the jury meeting and some touristic scenes from the historical town along with the winning and the many selected cartoons. 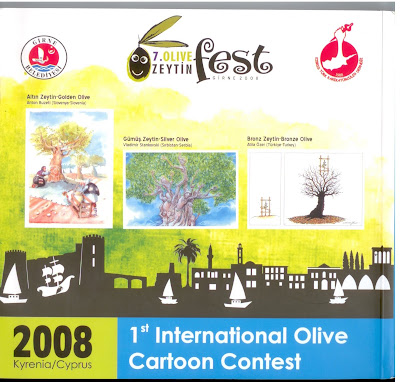 Hello
I participate in this competition, I suppose if you could report within the selected jobs.
thank you very much
Adrian Palmas, Argentina

Dear Adrian Palmas,
In this first edition of International Olive Cartoon Contest 2008, only Alejandro Tempesta Tastas from Argentina is in the participants list and his work is published on page 76 in the catalog. Possibly you sent your work for the second edition 2009 of which the catalog hasn't appeared yet?

Thank you very much for responding. I participate in the 2009 contest, thought the catalog was this edition