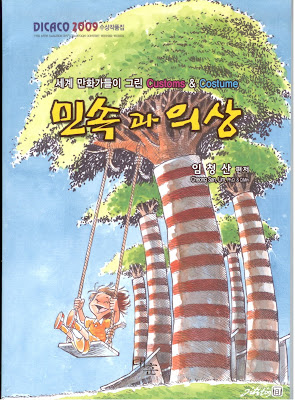 Yesterday received the new catalog DICACO 2009 from Daejeon, Korea. It was posted on 01.09.2009 according to the postmark, so it took about 80 days to arrive in Turkey by surface mail. A few cartoonist friends in Istanbul say they also have received the book. 29.8x21 cm in size, it has 96 color pages.
DICACO catalog is important because it almost summarizes a year's time in the cartoon world esp with the free theme works. This year 587 artists from 68 nations sent in 1,765 works and 375 artists are prized while some prize-winners have more than one cartoon published in the catalog. So we can say that about 400 cartoons are compiled in the book which makes it a great collection of the year in the field of cartooning. The aim is, as Mr Cheong San Lim, president and the editor, puts it in the foreword, to unearth creativity and original talent, and to upbring sound culture for youngers. This year they also "set up the most cyber cartoon gallery of Kongju Nat'l Univ and cartoon streets of West Daejeon and Jeondong station".
From Turkey 20 cartoonists are prized, half the number of entrants from the country.
Best Cartoon Prize: Menekse Cam, Mete Agaoglu, Musa Gumus, Askin Ayrancioglu, Mehmet Kahraman, Yilmaz Muslu, Kemal Ozyurt, Musa Keklik, Ahmet Aykanat, Nuri Bilgin, Muhittin Koroglu, Erdogan Basol, Mehmet Arslan.
Honorable Mention: Ahmet Umit Akkoca, I. Serdar Sayar, Seyit Saatci, Sema Undeger, Kenan Bogurcu, Mumin Bayram, Umit Mufit Dincay.
http://www.dicaco.com/ / http://dicaco.kongju.ac.kr/ . 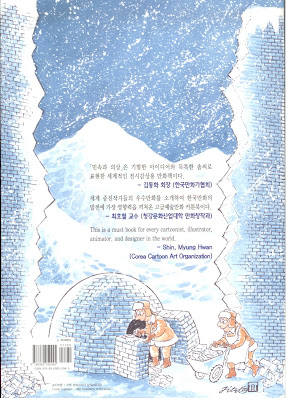