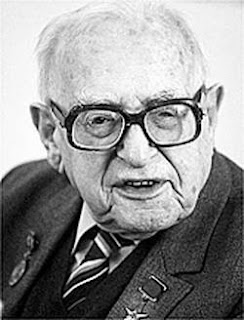 Boris Yefimov, an eminent Soviet political cartoonist who once personally took Josef Stalin’s orders on how to depict U.S. General Dwight Eisenhower, died in Moscow on Wednesday, just two days after President Dmitry Medvedev congratulated him on his 108th birthday.
Yefimov, born Fridland in Kiev in 1900, published his first cartoon, a caricature mocking the White Army General Anton Denikin in 1918, after his elder brother, journalist Mikhail Koltsov, suggested that he start drawing.
From 1922, Yefimov regularly published his cartoons in Pravda and Izvestia newspapers and in the satirical magazine Krokodil. Curiously, Yefimov’s latest job was with Izvestia: On his 107th birthday, he was appointed the newspaper’s chief artist.
Yefimov succeeded in drawing enemies of the Soviet state — first, the top German Nazi officials and particularly Adolf Hitler, whom he drew with a swastika under a sharp nose, and then, during the Cold War, portraying American and British politicians as plump villains with sagging cheeks...
Read the complete obituary
Also:
http://www.telegraph.co.uk/news/obituaries/3118013/Boris-Yefimov.html
http://www.independent.co.uk/news/obituaries/boris-yefimov-russian-cartoonist-who-was-a-friend-of-trotsky-and-a-propagandist-for-stalin-948532.html