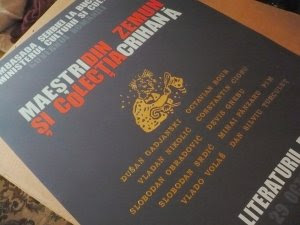 Exhibition "Masters of ZEMUN and Collection Crihana" 15-29 October 2008
The exhibition brings together ten cartoonists, illustrators of domestic and international politics in Serbia and Romania. The works come from two private collections of the two countries, namely, Salon International Caricature Zemun collection and collection of Galatean cartoonist Florian Doru Crihana.
International cartoon Saloon Zemun was founded in 1995 and quickly became known in the world, and now is living in a selective manner, that is participation is based on special invitation. Thus, the event was posted by salons and festivals in the cartoon world, dominated debut artists and amateurs.
"Collection Crihana" was founded in 2000, through acquisitions and exchanges of works that cartoonist Florian Doru Crihana did with Romanian authors in particular, but also with colleagues abroad. In only 4 years, the collection was presented to Cartoon Museum in Warsaw and the House of Humor and Satire in Gabrovo. Florian Doru Crihana organized with his collection over 80 exhibitions in Galati, Bucharest, Warsaw, Gabrovo, Bielefeld, Istanbul, Urziceni, Gura Humorului, Oostende.
Ten cartoonists who exposed in the Romanian Literature Museum are particularly active in Serbia and Romania. They are: Slobodan Srdic, Dusan Gadjanski, Vladan Nikolic, Vlado Volas, Slobodan Obradovic, Devis Grebu, Octavian Bour, Constantin Ciosu, Mihai Panzaru-PIM, Dan Silviu Turculet. Among the Serbian artists are the great masters Slobodan Obradovic and Slobodan Srdic with over 50 years of activity in every area and the Romanian cartoonists Devis Grebu, Octavian Bour and Constantin Ciosu with a long activity in Romania and the West - Devis Grebu, for instance, the illustrator and a columnist at the daily newspaper with a presence for decades in famous publications Le Monde, The New York Times, Washington Post, Wall Street Journal and more.
The exhibition is the third in the series of Serbo-Romanian presentations. The first two took place in 2006 the "Exhibit Serbia - Romania" and in 2007 the "Serbia vs. Crihana" exhibition.
See works at: http://colectiacrihana.wordpress.com/2008/09/29/artistii/