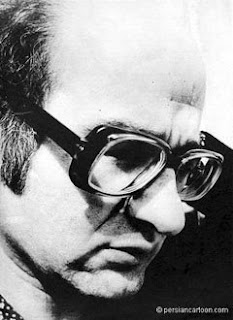 Ardeshir Mohassess (also spelt Ardashir Mohases, born on 9 September 1938 in Rasht died 9 October 2008 in New York) was an Iranian illustrator and cartoonist, residing in New York.
IRANCARTOON had Mohasses’s biography in their site as follows:
Ardeshir started his work as a child, drawing the characters from his mother's bedside stories. Today he is not only a prolific Iranian graphic artist, but also one of the most distinguished artists in this field.
Ardeshir was born in 1938 in Rasht in the northwest of Iran. His mother was a poetess and his father was a judge. After receiving his degrees in political science and law from the University of Tehran, he began working with Iranian and international newspapers and magazines, such as Keyhan, Ettelaat, Ayandegan, Ferdousi, The New York Times, Harpers, Jeune Afrique, and Nation.
His work has been featured in leading art magazines, such as Agraphis, Graphic Design, Graphic & Communication Arts, and he has had numerous one-man art shows in Iran, Europe, and the United States. Recently a collection of his works was purchased by the Library of the U.S. Congress to be presented in a show in the near future.
Ardeshir works constantly. He takes his pen and paper everywhere he goes – even to the movie theater, nightclubs, or when he goes to see a circus. The people and daily events are a powerful source of inspiration for his works.
Ardeshir says:
I begin the morning looking at and making sketches from old pictures and photos, Persian miniatures, and old Iranian religious paintings that are full of scenes of beheadings, spears, and scimitars that drip blood on the flowers and grass on the hills in the background. I end the day drawing people in cafes, cabarets, and music halls, dancers and acrobats leaping and jumping.
I arrange my characters in the manner of the colored lights strung above the shops and streets of Iran during the festivals and religious celebrations. If a work requires color, I use the same colors that once decorated the handles of the old meat cleavers and carcasses of lambs in butcher shops.
While I'm drawing, everything I've read or heard goes around in my head. Sometimes I recall an anecdote of the famous poet of Iran, Ahmad Shamlou, related to me. It seems an Arab general, noted for his incredible strength in wielding a sword, could strike with such speed that his victims continued to fight without realizing that they were sliced in half. The general would call out to them, "If you're a man, move!" When they did, they fell into two pieces. Whenever I am involved with a drawing that isn't going the way it should and one of the characters isn't doing what I want him to, I lift my pen from the paper and say softly, "If you’re a man, move."(http://www.irancartoon.ir/artists/categories.php?cat_id=109 )
In his essay “The pen is mightier”, Arsalan Mohammad writes:
... it is Mohasses’s deep-seated insecurity about himself that informs the characteristic perspective of his work – the constant identification with the underdog, the distorted characters, the bitter worldview. While there is a grim humour to many of Mohasses’s pieces, it comes at a price – real flickers of hope, of affirmation or positivity barely come through from his pen and ink pieces. Only in the colour paintings, produced at various phases of his career, do we see a redemption of sorts, through the vivid colours and fleshed-out forms....
Read the complete article at: http://www.thenational.ae/article/20080922/ART/210480103/1007/rss
Also:
http://www.mehrnews.com/en/NewsDetail.aspx?NewsID=537450
http://www.irancartoon.com/mohasses/
http://www.comicsreporter.com/index.php/briefings/
http://www.haditoons.com/analyse.php?analyse_uid=15
See Ardeshir Mohasses's illustrations & sketches at: http://www.irancartoon.com/100/mohases/index00.htm