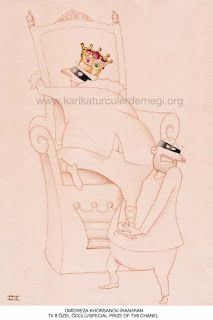 a) The contest is open to all cartoonists all over the world.
b) The cartoonists are free to participate with already published works as long as these works have not previously been awarded in any other contest.
c) Choice of subject is free.
d) The participants may send only one work.
e) The dimensions of works should not exceed 30 x 40 cm and only originals are accepted.
f) Name, surname, address, phone number and country of origin of the participant should be written on the back of his/her work. And also a short CV of the participant should be attached.
g) The works must reach the organizing association not later than July 31, 2008.
h) The results will be announced on August 11, 2008.
i) The participating cartoons will be kept at the Cartoon and Humour Museum of Istanbul by the Association of Cartoonists.
j) The participating cartoons will be put into an album. The cartoons for the album and the exhibition will be selected by a jury. The album will be sent to the cartoonists whose pieces of work are exhibited and published in the album.
k) The participating works will be exhibited first in Istanbul, then the big cities of Turkey such as Ankara, Izmir, Adana and Antalya.
l) Participants are considered to have accepted all the conditions.
The Prizes
a) Grand Prize: 3.000 $
b) Honour Prizes: 4 Honour Prizes, each 750 $
c) Special Prizes: Special Prizes offered by various establishments, associations, newspapers, art magazines, syndicates and agencies
Special Prizes of the Association of Cartoonists
Address: 28th International Nasreddin Hodja Cartoon Contest, Karikaturculer Dernegi, Alemdar Caddesi, Yerebatan Sarnici Cikisi, Sultanahmet 34122 Istanbul / TURKEY
Phone: +90 (212) 513 60 61
Phone: +90 (212) 519 90 21
Fax: +90 (212) 527 26 18
WEB: http://www.karikaturculerdernegi.org/
E-mail: info@karikaturculerdernegi.org
Regulations in several languages: http://www.karikaturculerdernegi.org/detay.asp?id=6997