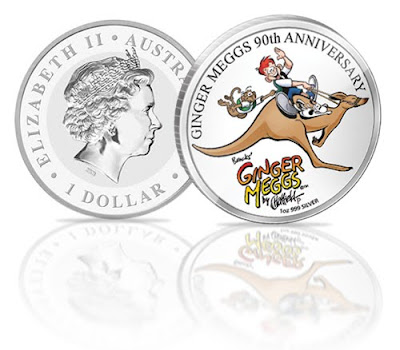 This report from Australian Cartoonists' Association http://www.cartoonists.org.au/:
The Perth Mint have today released a commemorative 1oz Silver Australian $1 coin to celebrate the 90th anniversary of Australia's favourite boy, Ginger Meggs.
It's not everyday an Australian comic strip character is featured on a coin. Ginger Meggs, created by James C Bancks, first appeared in 1921 and remains the longest-running and most popular comic strip in Australian history, running in 34 countries worldwide.
The coin features an homage to Bancks' 1945 Sunbeams Annual (Series 22) cover, which featured Ginger Meggs on the back of a kangaroo with his dog, Mike and his pet monkey, Tony.
The obverse portrays the Ian Rank-Broadley effigy of Her Majesty Queen Elizabeth II, the 2011 year-date and is issued as legal tender under the Australian Currency Act 1965.
Check out the Ginger Meggs coin at http://www.perthmint.com.au/