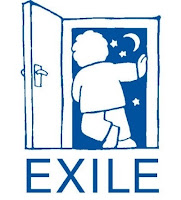 EXILE International Cartoon Contest 2017
Essen, Germany
A place. Somewhere - International Cartoon Competition
Never before have so many people across the world become refugees or have chosen to leave their home countries for some reason. UNHCR – the United Nations High Commission for Refugees – estimates that there are currently about 60 million refugees, and the numbers are increasing every year. In addition there are those who take flight, unregistered and unseen, within the family or in secrecy across borders, who do not appear in any statistics and whose numbers can only be guessed at. Today there are 250 million people worldwide living in a country other than the country of their
birth.
There are as many reasons for this state of affairs as there are for the fates of the individuals concealed behind the figures. They leave their homes to escape poverty and a lack of prospects, to flee war, environmental destruction, the consequences of climate change, the effects of discrimination and persecution on account of their gender or sexual orientation, and because they belong to a different ethnie or religion or hold a different political viewpoint.
The consequences for those affected, their families and friends, are enormous. Uprootedness, life as a refugee living in a camp or a home, of which only a fraction are in Europe or other western countries, confront people with severe and bitter problems. What all these people have in common is the desire to reach a place where life is better and more worth living, and to spend their lives in dignity and peace.
But where are attempts to remove the structural causes of poverty and marginalization through education, participation, medical care, humane workplaces, tolerance and cultural diversity to be found?
Where are there successful attempts to create living conditions such that people will stay at home or return there rather than opt for perilous ways of escape?
And where have there been attempts to enable people to live in dignity and security and to put down roots in a new home?
In announcing the international cartoon competition A place. Somewhere our aim is to gather voices and ideas, which will help us to understand the causes of flight and migration from various countries and from differing points of view, and to show the consequences for the lives of the people affected, particularly how women and children are affected. We also want to ask where and alternatives come from which contribute to combating the causes of flight.
The results of the competition will be publicized in the form of a travelling exhibition to be mounted in as many cities as possible, and an accompanying catalogue. We do not just want to inform people about how those in other countries and regions of the world see the theme, but also to encourage people to involve themselves in the public debate on flight and migration.
Conditions of Participation:
Artists may submit up to three works. The maximum size of the cartoons is DIN A3 or a data file with a resolution of 300 dpi (black and white or colour).
The final date for submissions is July 30th 2017. Submissions should be sent to:
EXILE-Kulturkoordination,
Wandastr. 9, D 45136
Essen,
GERMANY
or
competition@exile-ev.de
(in German or English).
A jury will select the best three works, which will receive prizes of 1000 Euros, 750 Euros and 500 Euros, as well as 10 works, which will receive an honourable mention, and about 100, which will be displayed in a travelling exhibition and a catalogue. Through their participation the cartoonists agree to grant EXILE the rights to the publication of their work in the exhibition and the catalogue as well as for use in public relations.
Exile is a non-profit agency for international and intercultural projects in the arts, culture and
education. Since its foundation it has organized eight international cartoon competitions and has mounted successful travelling exhibitions on such themes as migrant labour, racism, ecology, and the rights of women. “The projects developed by EXILE Cultural Coordination aim through art and culture to make unheard voices audible and in this way to contribute to a change of perspective and understanding of social diversity in a globalized world”
A project of EXILE-Kulturkoordination in cooperation with Engagement Global commissioned by the Federal Ministry of Cooperation.
Web: http://exile-ev.de/en
Source: Goethe-Institut Nairobi.
Competition e-mail borrowed from source.