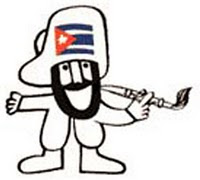 XX INTERNATIONAL BIENNIAL OF GRAPHIC HUMOR CUBA 2017
The circle of comic artists and cartoonists of The Cuban Journalists Union and the San Antonio de los Baños Humor Museum, call for the XX International Biennial of Graphic Humor, Cuba 2017, which will take place from April 2nd to April 5th, 2017 co-sponsored by the Artemisa Province Culture Direction.
ABOUT THE GRAPHIC HUMOR CONTEST
The participation in the contest is open to all graphic artists. They can compete with free theme sending original artwork or digitally processed (printed and signed by the author) with a maximum format of 30 x 40 cm. It is possible to compete in:
-General Humor
-Political Satire
-Humor comic
-Caricature
-Humor Photography
-"Tomy" Online Award of political humor (in memory of the caricaturist Tomas Rodriguez Zayas) that in this occasion will focus on "Perspectives from the South" (300dpi JPG)
Each author can send one work by each category, besides Tomy Online Award.
In the reverse of the original on paper or cardboard, participants should specify the following information about the author:
-Full name and artistic signature
-Title
-Category
-Technique
-Personal Address
-Country
-Email
-Phone number
The same personal information must accompany the message of the works sent by e-mail for the Tomy Online Award, specified from the subject and the email address: humor@upec.co.cu
The works made on paper or cardboard, conveniently packaged will be received until January 31st, 2017 at:
Unión de Periodistas de Cuba (Upec)
XX Bienal Internacional de Humorismo Gráfico
Calle 23 no. 452, Vedado, Cuba. CP 10 400
Teléfonos: (53) 7832- 37 22/ (53) 7832-45 59 ext. 116
About Jury
The admission jury will select the works presented for the contest that will be exhibited at the XX International Exhibition of Graphic Humor from San Antonio de los Baños.
The international jury is integrated by prestigious persons from the graphic humor will award the prizes whose decision will be final.
About Prizes
-Eduardo Abela Prize, the greatest award of the contest in honor of the outstanding Cuban caricaturist (1889-1965) consisting of a diploma and 1000 cuc.
-1st, 2nd and 3rd Prizes in each category and whatever mentions the jury considers consisting of Diplomas.
-Online Tomy Prize consisting of a diploma and a reproduction of Tomy´s work.
As a tradition several cultural and social Cuban institutions join the contest and present collateral prizes.
Source: raedcartoon.