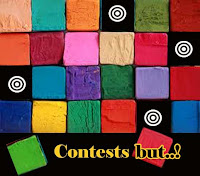 Contests....... But ...?
Contest usually organised worldwide, so every country has its own cartoon contest for example and such intellectual events varies according to amount and quality of media and financial support.
On the other hand, there are several Contests here and there which have lost credibility, the thing that enforced every respectable cartoonist to exclude himself away from them because of the lack of organising and ignoring his/her questions & requests though.
Worth mentioning that other Contests usually held just to bring in cartoons, collect and then sell them or invest them within other special affairs, in other words we can see that eventually, cartoonist is the skip goat of such exploitation and other... etc.
Our questions are the following:
1 - When would you boycott cartoon Contests in general? Please clarify your point of view and justify the reasons, what and why.
2 - Is politics are the most important element of joining or not joining cartoon contests?
3 - Is the special situation and private circumstances of every contest are the only reason for some cartoonists to include two faces within their contributions?
Regards
Raed Khalil
(Source: raedcartoon).